Parks and open spaces in Coventry - Swanswell Park and Pool 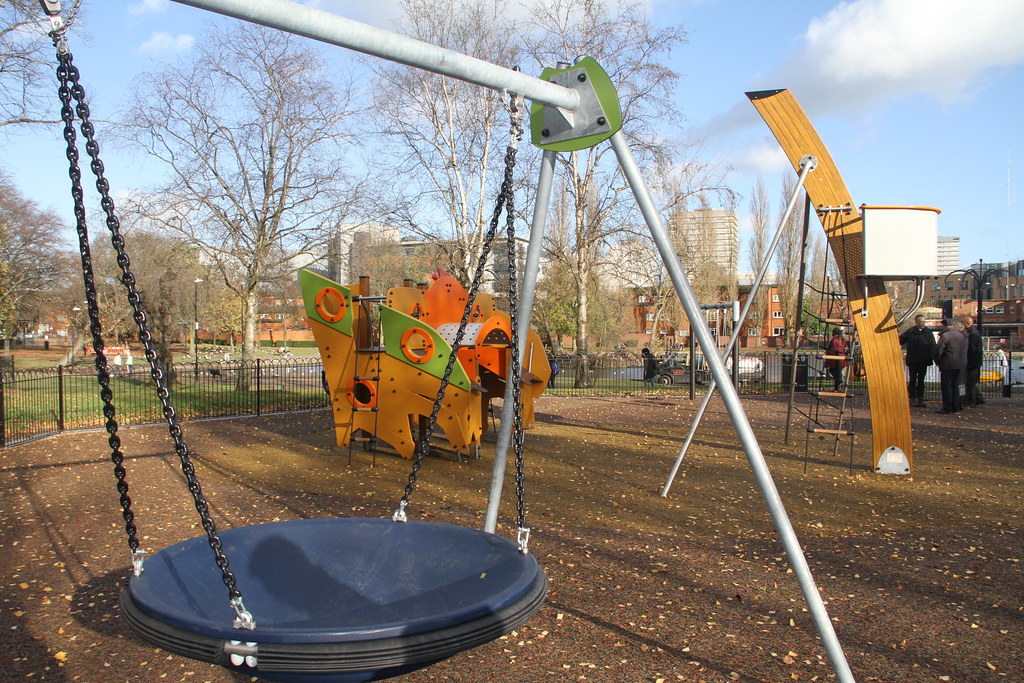 This historic pool has been here since the 12th century and was probably first created as a medieval monastic fishpond. Now it is a tree lined ornamental pool with fountains and recreation space right next to the city centre.

It has been refurbished to include play equipment for younger children and the very latest in outdoor exercise equipment-something for all ages to enjoy.

Outdoor exercise equipment can be adjusted to suit age and ability providing work out opportunities for everyone. The equipment includes spinning cycles, steppers, high pulleys and a leg press unit and are grouped to allow people to work out together as they cross the park.

The site of Swanswell pool is suspected to have originally been a seasonally wet, marshy area in the Sherbourne valley. Permanent ponds may have naturally formed to create not only the Swanswell pool but water bodies which gave their name to Pool Meadow and the Bab Lake, however these features are not common in this part of the Midlands and the Swanswell Pool may have been artificially created as a monastic fishpond when the Pool was part of the Priors half of the city in the 12th century.

After the dissolution of the monasteries in the middle 1500s, the estate belonged to the St. Johns Hospital until 1551 when it was part of the endowment of the Sir Thomas White’s charity. They held it until 1880 when they gifted the park to the city.

Information obtained from Pool’s Coventry Antiquities, published in 1863 indicate that the present shape of the pool dates from 1850 when two pools of water at the Swanswell were put together and the bed was cleaned and deepened whilst the southern end of the pool was filled in and walled to make way for the construction of White Street. At the same time, the pool’s surroundings were freed and the walks in the park gravelled.

The pool was originally fed from natural springs including springs in the grounds of what was once the Coventry and Warwickshire Hospital (on the far side of Stoney Stanton Road). A further supply of water would probably have been the Springfield Brook. Following the building of a new block in the Coventry and Warwickshire Hospital in the 1950s, a surface sewer was laid which linked up the various sumps and wells which had formerly fed the pool. This was subsequently diverted into the Springfield Brook which itself was culverted in the 1960s and still runs beneath the eastern side of the pool. As the brook’s flow level was lowered, no water from the brook enters the pool anymore; however the outfall from the pool is still into the Springfield Brook via a weir in the SE corner.

The Domesday survey makes reference to a mill on a lake on the outskirts of Coventry which may have been referring to the pool although the reference may have been to the not too distant Bab Lake rather than the Swanswell. There was certainly a mill in existence in 1579, located at the point where the Springfield Brook left the pool and called New Mill, suggesting the presence of an older mill on or near the site. It eventually became absorbed into the Swanswell waterworks which was begun in 1632. By the 1840s the Swanswell Waterways complex was badly neglected. The waterworks was inadequate to supply the necessary amount of water and the mill had been allowed to fall into a poor condition. Following the Coventry Water Act in 1844, the Swanswell Waterworks was superseded by new works in Spon End with the result that the New Mill was taken down.

Prior to 1868 there was a corn mill known as the City Mill in Wheatly Street, located to the south of the Swanswell pool and from 1889 to 1940, this mill was powered by steam and drew up to 50,000 gallons of water a day from the pool. The extracted water was returned to via an outlet in the south eastern corner of the pool and large fish, probably carp, could be seen swimming in the warm water, feeding on the fragments of dough which were still in the water. Problems were experienced with the hot water being discharged in the summer and in 1903 the Cemeteries and Recreation Grounds Committee instructed that hot water from the city mill was not to enter the pool during the summer months. The West Midlands Passenger Transport Executive bus garage now occupies the old City Mill site.

Swanswell Park in the 20th Century

In 1904, King Edward VII gifted a swan to the Swanswell. Prior to the King’s gift a local councillor, Councillor Gardener, had also gifted a pair of black swans and subsequent to the King’s gift the Vintners Company had also placed a pair of black swans on the pool. Later still, Councillor Copson presented runner ducks to the corporation for the Swanswell.

Prior to the First World War regular band concerts were held in the park during the summer months. This practice continued up to the Second World War but it was not resumed in the post war years.

During the last world war, the raids on Coventry of November 1940 and April 1941 ruptured virtually all the trunk water mains in the city centre. The Swanswell pool and the River Sherbourne were the only sources of water in the city centre – a vital resource for fighting the many fires caused by the many thousands of incendiary bombs that fell on the city. A further consequence of the bombing was the amount of brickwork and other building debris that had to be disposed of. It is thought that the island in Swanswell Pool was partly (re)constructed from some of this material as the erosion of the island has exposed bricks and shaped sandstone blocks.

The building on the island was constructed from the same stones as those now in the water. This may have been material derived from the city after the WWII bombing – potentially even parts of the Cathedral.

Anecdotal evidence suggests that the building on the island was constructed to house the rowing boats which were available for hire on the pool until the late 1960s. The remnants of the building suggest that it was ornamental with a peaked roof with what appears to have been a timber framed window and what may even have been a small (probably non-functioning) chimney!

The interior of the building was divided into four separate areas for the boats and these have subsequently provided a nesting area for water fowl, including a very territorial pair of swans who have usually raised 2 or 3 cygnets on the island each spring.

Swanswell Park in the 21st Century

In more recent times, the pool was dredged to remove many tons of silt and debris from the base of the pool. In early 2012, following concerns with the condition of fish in the pool, the pool was officially registered as a fishery and hundreds of carp, rudd and roach were removed along with dozens of goldfish. Many of the wilier large carp escaped however and countless numbers of fish remain!

In 2015, Coventry City Council improved the park thanks to funding from nearby housing developments. Work included reinforcing the sides of the island, new playground and fitness equipment, new street furniture and new entrance features.

How to get here

Walk:
The park is a short walk from the Transport Museum, and located next to White Street (CV1 2DS).