The Council began monitoring the carbon footprint of its operations in 2008 and set a target to reduce CO2 emissions by 35% by 2020. We achieved this target in 2015/16, and are now in development of a new, more ambitious Climate Change Strategy. 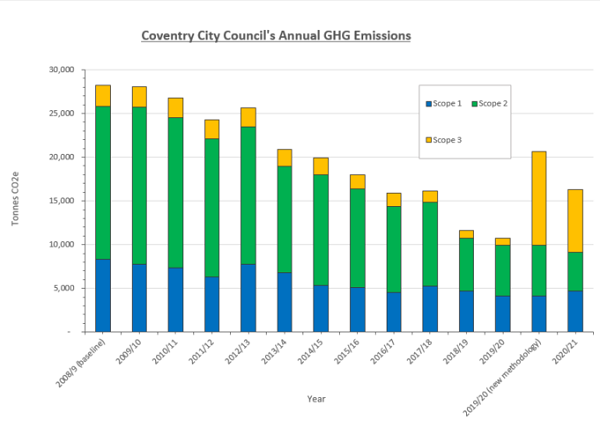 Coventry has always been a city with big ambitions. Since hitting the last emission target six years early, we have continued to develop a strong track record in delivering projects and in our ambitions to lower carbon emissions and become a more sustainable City. This document highlights the progress made in key sectors.

The City Council played an instrumental role in securing funding for and the delivery of the UK Battery Industrialization Centre (UKBIC). Opened in July 2021, this open access research facility supports the transition of the UK to become a world leader in the design, development and manufacture of batteries, initially for vehicle electrification, but with potential wider applications.

Also funded through European Regional Development Fund (ERDF), the Green Business network allows businesses to come together at events, share ideas and information through webinars and e-newsletters, and mobilises them to act against climate change.
The network has around 1,385 members, including organisations from large manufacturing or service businesses to SMEs based in Coventry and Warwickshire.

4. Business Sustain
Business Sustain is a team of sustainability consultants based within Coventry City Council providing national businesses of all sizes with environmental management assistance. This offering is funded through client fees for the services provided. The team supports approximately 170 companies with assessment preparation and ongoing compliance to the environmental management standard ISO140001:2015, alongside other bespoke items such as Spill Kit training, Duty of Care or paperwork audits.

Street lighting - Coventry was the UK's first city with centrally controlled dimming street lighting. 28,700 new Private Finance Initiative (PFI) lighting columns were installed between 2010 and 2015. All lighting columns are targeted downwards to reduce light pollution, and this has provided 38% energy reduction across the city saving just over 5,000 tonnes of carbon since 2012.

Due to the changing energy landscape and the transition to net zero, it was seen to be an opportunistic time to reflect and model potential future energy scenarios for Coventry. The modelling showed that a more localised smart energy system could generate a net present value of £720m for the region. This is derived from more local opportunities a market could bring which could help balance the grid, ensuring value is captured and distributed at a local level. This benefits citizen by lowering bills, creating jobs, and generating local economic benefits.

There are a number of key enablers such as local data, collaboration, regulatory change and governance that would unlock the opportunities that a RESO offers. Coventry City Council are now investigating how to apply the RESO insights strategically to support the transition and realise the benefits that RESO has suggested.

Air One - Coventry City Council partnered with British start-up Urban-Air Port Ltd, to develop Air One, a rapidly deployable Urban-Air Port. The project had the aim to create a zero-emission-mobility ecosystem that will significantly cut congestion and air pollution from passenger and cargo transport. It is estimated that in 2025, drone logistics via UAP will emit 33% less than gradually electrifying middle mile logistics.

Coventry’s Very Light Rail – Working with WMG, Transport for West Midlands and Dudley Council to pioneer the development of a new form of mass transit, which will be affordable and suitable for smaller cities. This includes developing a prototype vehicle and test track.

Electric buses – National Express already operates 10 electric buses on key routes in the city and Coventry has plans to become the first all-electric bus City in the UK, with a further 286 planned by 2025.

On-street electric vehicle chargers - Coventry has one of the largest networks of charging points accessible to the public in the UK, outside London. There are currently 468 available, and this is planned to rise to 623 by July 2022.

Coundon cycleway – The city’s first fully segregated cycleway built according to modern standards is currently under construction. It will connect Coundon to the City Centre, with work also due to begin on a further route between the City Centre and Binley early in 2022

WM Cycle Hire – Partnering with Transport for West Midlands to add more sustainable transport options around the City Centre. The first rental bikes were installed in Coventry in March 2021 in central locations such as War Memorial Park and outside the train station.

Energy from Waste – Under Coventry’s existing Waste Management Strategy, waste that cannot be re-used, recycled or composted (residual waste) is incinerated. Around 92% of Coventry’s residual waste is diverted from landfill and instead sent to the Energy from Waste plant. A study by CSWDC in 2019, highlighted that the plant saved 27,808 tonnes of additional carbon dioxide from being emitted to the atmosphere in 2018.

The Heatline network then supplies any residual heat from the City’s Energy from Waste plant to public buildings including the Council House, Herbert Art Gallery, Coventry Cathedral, 1 Friargate and The Wave. Approximately 8,000 MWh of heat is delivered to these buildings each year with capacity to deliver significantly more. Heatline delivers savings of approximately 1,100 tCO2 per year compared to the emissions that would result from the connected buildings using conventional gas boilers.

Materials Recycling Facility – A new Materials Recycling Facility is set to begin construction near Coventry which will have long term circular economy benefits for the West Midlands. The facility, once operational, will have the capacity to process 175 kilo-tonnes per annum of domestic and commercial recycling, and is expected to save councils around £1.4 million a year.

Radford Brook linear park –The project was part of a WMCA funded scheme to create a linear park from Belgrade Plaza to Naul’s Mill Park. This naturalisation project enabled one of the cities ancient water courses, Radford Brook to flow again for the first time in over a century, creating a wildlife haven and improving water quality in the city.

IEMA membership - In December 2020, Coventry became the first city council to become a corporate member of the Institute of Environmental Management and Assessment (IEMA).

CDP Global - The city has been recognised as a global leader on climate action and transparency, in 2020 we achieved a place on the CDP’s Global Cities A- List in recognition of our commitment to tackling climate change. In 2021, our rating fell to a B- and we are working with CDP on the measures we can adopt which take us back to an A rating again.