Reducing the impact of poverty

There are significant pockets of multiple deprivation in the city

According to the 2015 English indices of multiple deprivation (IMD), 18.5% of the city’s neighbourhoods are amongst the 10% most deprived areas in England. Overall, the city is the 46th most deprived local authority area out of 326 across England. Furthermore, the city has a notably higher proportion of households with no working age adult works (17%). One-third of Coventry households with children are regarded as low-income families (33%). An updated IMD for 2019 is expected later this summer. 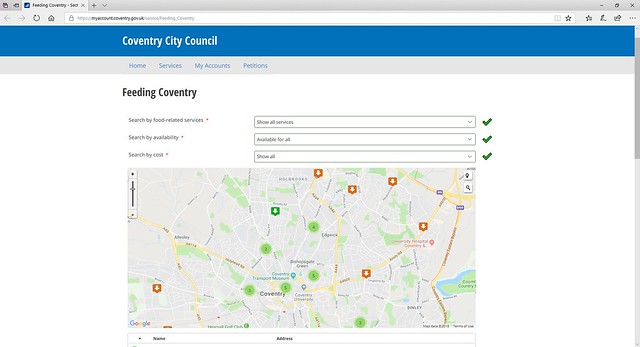 The city’s Feeding Coventry programme has launched a web-based map of places where families in need can access food handouts, cooked meals, social events and food-related learning across the city.

The median full-time gender pay gap for Coventry is estimated at 23.3 (where 0 represents gender parity; and a positive value represents higher male pay). This is notably bigger than the England average of 9.5.
Nationally, the gender pay gap has continued to fall and indeed the gap for full-time employees is close to zero for those aged between 18 and 39 years. Locally, the large gap may reflect a gendered profile in certain highly paid jobs in the economy.
Note that the gender pay gap is the percentage difference between men’s and women’s median earnings across all job types; it is not a measure of the difference in pay between men and women for doing the same job.

GDHI measures the money available to spend or save after distributional effects such as taxes, social contributions and benefits. In 2017, Coventry’s GDHI stood at £14,455 per head, notably less than the region and nationally (by about £2,500 and £5,500 respectively). Notably, while GVA per head in Coventry is higher than the average for similar areas, GDHI per head is lower; meaning residents capture a lower share of GVA than in other places.

Total GDHI, at £5.206 billion, increased by 2.7% in 2017 compared to 1.6% for England. However, after considering Coventry’s rapid population growth, GDHI per head grew by only 0.7%. This is below inflation, indicating that overall real incomes fell in 2017. 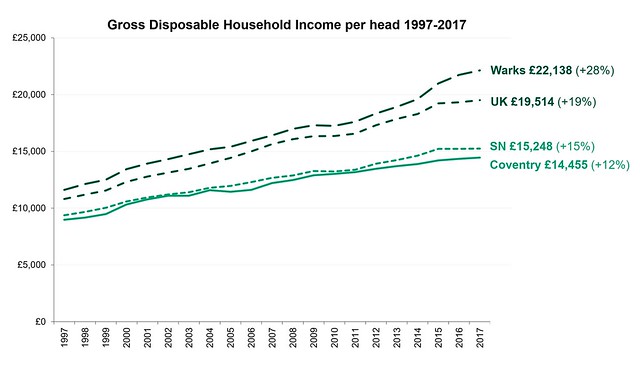 Recognising that despite the city’s growth, there are still a large proportion of the population that are significantly disadvantaged and whose overall health and life expectancy is lower than those in more affluent parts of the city, Coventry held a Poverty Summit in November 2018. This brought together the Council, universities and voluntary and community organisations to recognise the progress made as a Marmot city, and to share insights on using a system-wide approach to alleviate the harm of poverty.

Working in partnership as One Coventry

By working in partnership, advice and support agencies can be more effective in helping the city’s most vulnerable residents to share the benefits of the city’s growth. For example, the city’s Universal Credit Working Group and Welfare Reform Working Together Group brings together local advice agencies supporting some of the most vulnerable residents in the city with public sector organisations to share updates, learning and collaborate on best practices.

Many community and voluntary groups, including a substantial number of faith-based groups, are addressing the needs of the city’s most vulnerable residents such as rough sleepers and refugees, by providing food, clothes and charitable donations. A number of these groups feel that they would benefit from co-ordinating resources, better collaboration and having a networked approach.

Previous Helping local people into jobs Next Supply, choice and quality of housing