Recognising that climate change is a global emergency with significant impacts on local people and communities, the Council, partners, businesses and communities are working together using a One Coventry approach to address the issues.

The first Coventry Climathon brought together policymakers, students and citizens to brainstorm ideas to tackle air pollution in the city. Innovative ideas ranged from creating a walking bus where children are dropped off a mile away from school grounds and walk the last leg in supervised groups; to partnering with City of Culture to create a ‘Clean Coventry’ brand, building walls with planted features in the city, offering free public transport on days with City of Culture events, and displaying air quality monitoring data in real time alongside road signage.

This event was a joint project by the Council, the University of Warwick, Warwick Business School, Coventry University, and the EU’s European Institute of Innovation and Technology Climate Knowledge and Innovation Community (EIT Climate-KIC). 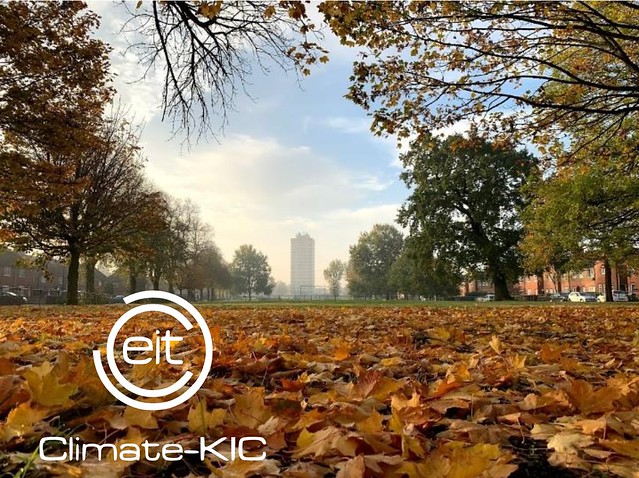 Find out more about the Coventry Climathon.

Green Week, which took place in March 2019, brought events and educational talks to the city. These included a sustainability market, a pay-as-you-feel vegan soup shop at Broadgate, a litter picking walk, a swap shop, a bike maintenance stall, a plastic-free stall, and a FabLab Repair café where the public could learn to fix broken items.
Regional businesses, schools, charities, and community groups were involved. The event was a joint project by the Council, Warwick District Council, Action 21 (a charity), the University of Warwick, Coventry University, and their respective student unions. 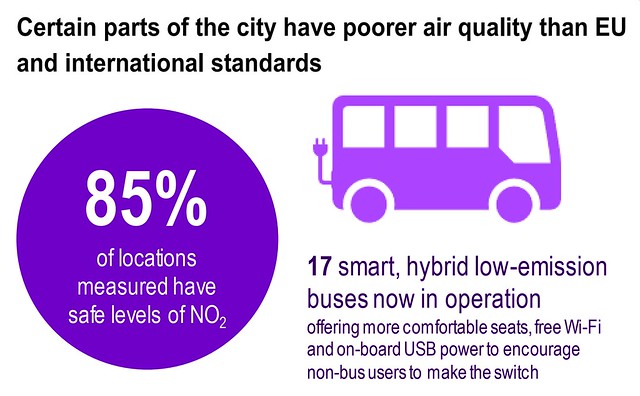 The Government has identified Coventry as one of 22 towns and cities in the UK forecasted to exceed legal limits for nitrogen dioxide (NO2) in 2021.

Poor air quality is an important contributor to mortality and exacerbates certain health conditions. Research suggests that long-term exposure to particulate air pollution contributes to mortality at a similar level to obesity and alcohol. Air quality particularly affects the most vulnerable, including elderly people, pregnant women, children, and people with cardiovascular and/or respiratory disease. In Coventry, NO2 is one of the pollutants of concern. While 85% of locations measured had a safe level of NO2, there are areas beyond safe levels, including Ball Hill, Foleshill and the Holyhead Road/ring road junction.

The Council produced a Coventry Local Air Quality Action Plan (LAQAP) in February 2019 and submitted its Outline Business Case to Government. It sets out a comprehensive package of measures to address areas of the city with the poorest air quality, including dynamic traffic management to steer traffic away from air quality hotspots such as Holyhead Road; cleaner vehicle fleets; and the promotion of walking, cycling and bus travel for local journeys by providing enhanced and more attractive routes and services.

The Government issued a Ministerial Direction requiring the Council to undertake additional modelling, review the measures proposed in the Action Plan and submit revised evidence in June 2019. The Direction also requires the Council to submit a Full Business Case (FBC) for the LAQAP by late September. The Council is progressing the work required to comply with these requirements.

The Government also directed the Council to implement a Clean Air Zone (CAZ), whereby vehicles that do not meet the required emission standard are charged for entering the zone. The Council’s view continues to be this is not an unacceptable or proportionate response to the issue considering the city’s local circumstances and given the need to undertake additional modelling work and update the Action Plan. In developing the Action Plan and FBC, the Council remains mindful of the need to improve air quality in the city in a way that does not have negative impact upon residents and the business community.

Road network are in a good/acceptable condition

The 2018/19 survey shows 99% A roads, 98%, B & C roads, 82% unclassified roads and 38% of footways to be in a good/acceptable condition. National indicators show that the condition of highway network remains above the national average. Satisfaction is also high, with Coventry ranked 22 out of 113 authorities that took part in the 2018 National Highways and Transport Network (NHT) survey. 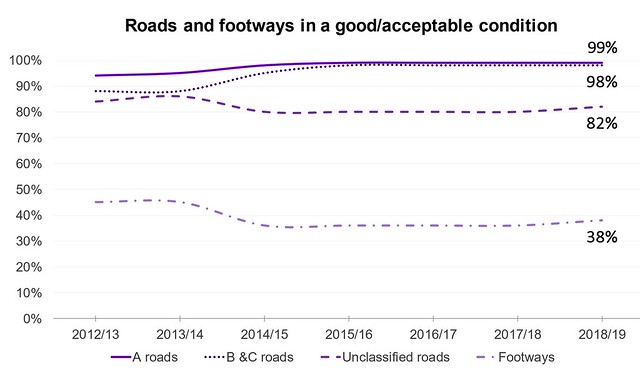 The severe winter conditions in late-2017/early-2018 resulted in an increase in the number of high priority potholes reported in 2018/19, rising by 9% from 846 in 2017/18 to 925. This year, the Department for Transport (DfT) awarded Coventry an additional £1.2m from the pothole action fund. This is being used for pothole repairs, road patching, and road resurfacing to help prevent further deterioration. In 2018/19, amid rising prices and reduced budget in response to central government’s funding cuts, treatment programmes were completed on 15.72 miles of carriageway and 60 footway sites. 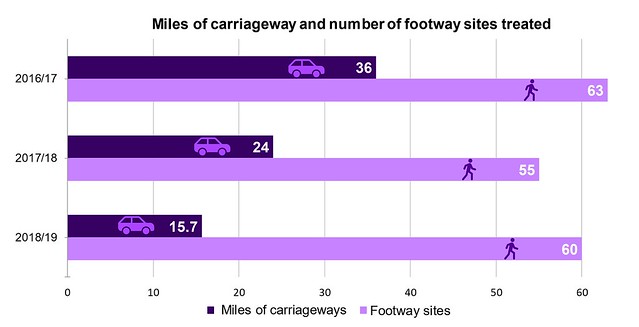 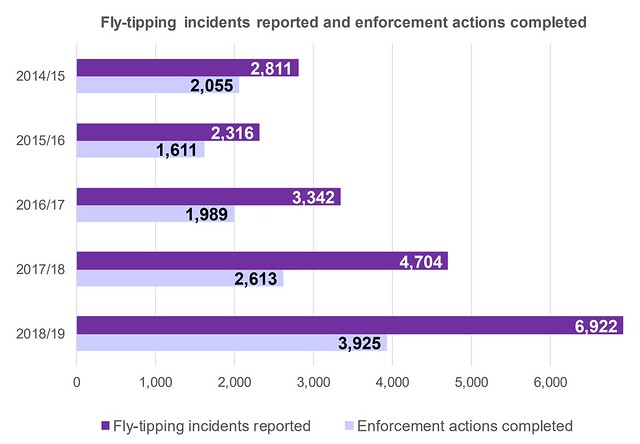 The city faces challenges around littering and fly-tipping, with a marked increase in the number of fly-tips reported. It should be noted that fly-tipping is increasing nationally.
There has been a 47% increase in the number of fly-tips reported, with an increase from 4,704 in 2017/18 to 6,922 in 2018/19.
The online reporting form makes it much easier for the public to check if the fly-tipping has already been reported and if not for them to ensure that an accurate report is then generated.

…and a 50% increase in enforcement action taken

The number of enforcement actions has also increased from 2,613 in 2017/18 to 3,925 in 2018/19, a 50% increase. Despite the marked increase in fly-tipping, the Council has slightly increased the proportion of fly-tips attended to and addressed; and has developed metrics to identify, determine and address the levels of cleanliness across the city.
Fly-tipping reports are monitored, and with intelligence from citizens and partners including the police and housing associations. ‘Hot streets’ are identified, allowing resources to be targeted on problem areas. Neighbourhood enforcement officers are deployed to these areas, providing education and a staged approach to enforcement when required.
‘Keep it clean’ cards are distributed, which outline the way waste should be disposed. Residents are encouraged to take ownership of environmental issues within their community, and to notify the Council of any issues and possible perpetrators.

A moderate increase in recycling

This is the first full year since the move to alternate weekly waste collections. Provisional data shows overall the recycling rate increased from 32.9% to 34.9%. There has been a sustained increase in recycling (including food and garden waste), reduction in residual waste, and overall drop in tonnage collected. 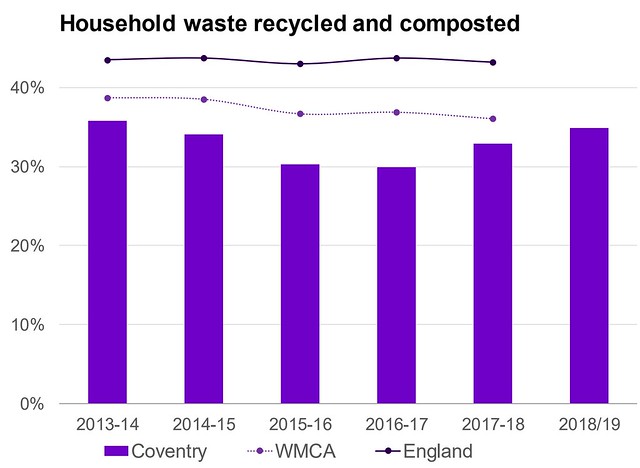 Over 6,000 residents are now part of the recycling club. The club continues to provide hints and tips for residents and enable residents to earn points for recycling which are turned into donations to support local good causes.

In 2018/19, 1,016 inspections were completed and 96% was graded A or B. These weekly inspections, based on the former national indicator 195, measures work undertaken by the Streetpride teams including cleanliness, fly-tipping, graffiti, grass cutting, hedges and shrub beds of the local environment.

Cleansing frequencies are adjusted to manage increasingly limited resources in line with the Grade B standard. The service is now replacing pedestrian operations with mobile units. Initial trials suggest an increase in litter collected and improved standards.

This year, 550 additional trees have been planted throughout Coventry’s parks and green spaces to celebrate the 550th birth-anniversary of Sri Guru Nanak Dev Ji, the founder of the Sikh religion. This is organised by the Sikh Union, the Friends of Longford Park, and the Council’s Park Rangers. At the initiation event, hundreds of primary students, along with representatives from multiple faiths, gathered to plant saplings and pray.