Overall, Coventry follows the national and regional increase in crime rates per 1,000 population but remains lower than West Midlands areas such as Birmingham and Wolverhampton. 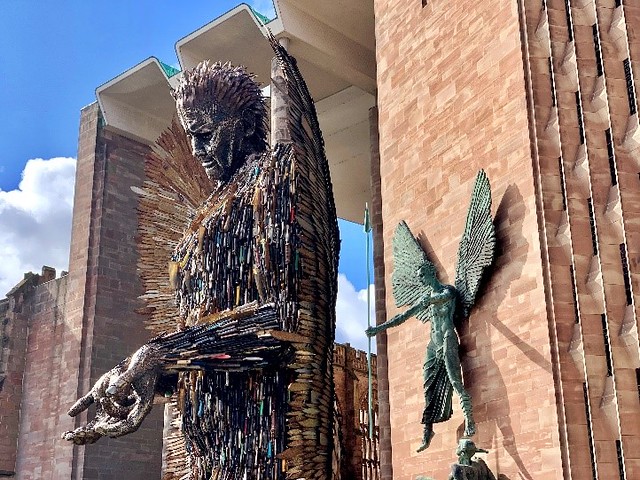 The Knife Angel, an 8 metre (27ft) sculpture made up of 100,000 confiscated knives dedicated to the victims of knife crime, was temporarily installed at Coventry Cathedral in March-April 2019.
The installation was made possible by sixteen Coventry organisations working together. The local community responded to the installation and laid flowers and photos by the Angel in memory of local victims of knife crime.
A programme of activity was organised around the Angel by the City of Culture Trust and the Cathedral to spread its impact.

The city has adopted a public health approach to violence prevention. This means regarding violence as a preventable consequence of multiple factors (e.g. adverse early-life experiences, harmful social or community experiences and influences), instead of isolated incidents or solely a police enforcement issue.

Public concern about crime and violence (especially knife crime) has negatively affected their perceptions of safety. In 2018, fewer Coventry residents (74%) said they felt safe in the neighbourhood at night than two years ago (85%). This is not unique to Coventry and is in line with the national average.
There were vast differences between neighbourhoods: in Stoke Park/New Century Park, 98% felt safe at night, but in Tile Hill, only 45.8% do. 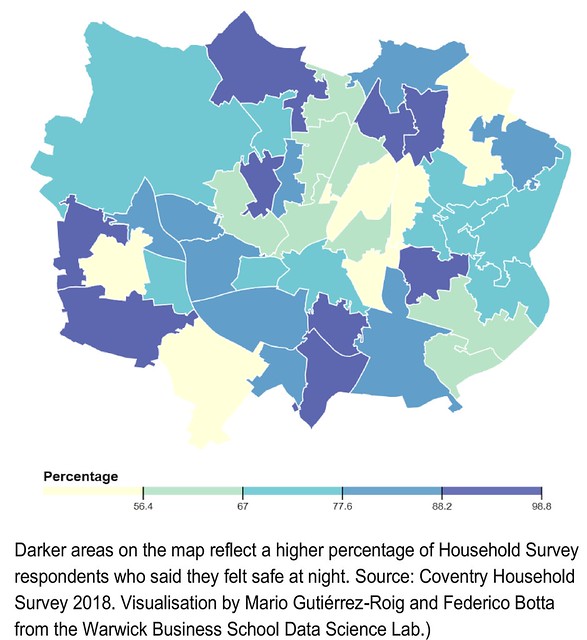 Research by Warwick Business School suggests residents were more likely to feel safe at night if they felt:

Coventry’s youth offending rates are low. In 2018/19, there has been a further reduction in first time entrants to the youth justice system (93, down from 126); and reduction in the number of substantive offences (479, down from 582). However, many of the young people known to youth offending face complex needs including mental health issues, poor educational attainment. and poor school attendance. This will have an impact on their life chances.

…but nearly a third of young people feel unsafe

In 2018, only 16% of the city’s young people felt very safe or safe in the city; and 30% said they felt very unsafe or unsafe in the city. The remainder were in-between and did not feel strongly either way. Young people voiced concerns about knife crime, and some alluded to postcode gangs, citing fear about stepping on another gang’s turf. Almost a third of young people said it was easy to buy illegal drugs in their area. Social media may be disproportionately affecting perceptions of safety and facilitate crime; for instance, it was pointed out that Instagram, a photo-sharing social networking app, was used to sell illegal drugs.

Young people with behaviours regarded as ‘challenging’ may fall outside of the support offered by the city’s family hubs. Some ethnic minority communities felt they did not know where to access help to guide their younger children.
There is scope for developing partnerships with schools, colleges and universities to address this in local areas, for instance: making use of the facilities of the city’s two universities to provide a space for youth groups and simultaneously raise aspirations; making use of student volunteering networks already in place, such as Warwick Volunteers; and connecting businesses across the city with youth mentoring schemes such as One Million Mentors.

The largest category (85.5%) of hate crime and non-crime incidents recorded were related to the protected characteristic of race/ethnicity; followed by sexual orientation (8.1%); disability (2.4%); sex/gender/transgender (1.9%) and religion (1.9%). Incidents relating to disability or sex/gender/transgender saw an increase.
Note that these figures are by no means the full picture. Under-reporting makes it difficult to quantify the prevalence of hate incidents and hate crime. 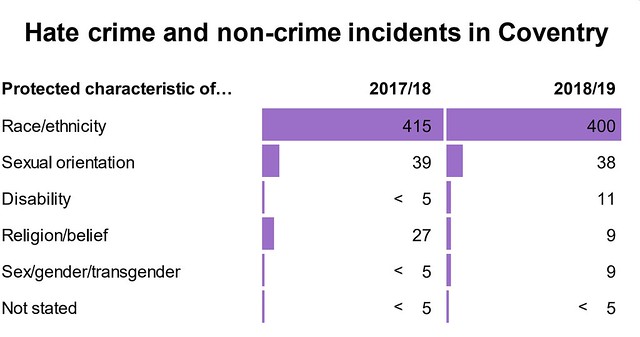 The city’s new Hate Crime Strategy 2019-21 recognises that hate crime has a devastating and often lasting effect on victims and their families. It divides our communities; prevents people from living and enjoying their lives; and makes people fearful to leave their homes, let their children play outside, or be who they are.
Backed by the Coventry Police and Crime Board, the strategy aims to: support victims, witnesses and communities; reduce and prevent incidents and increase awareness and reporting. It makes each partner accountable; and encourages a better understanding of why certain groups are more reluctant to report hate crime, and to encourage all communities to increase reporting. Community organisations been involved in developing the strategy and are working collaboratively with the Council to develop an action plan.

The Council works closely with local groups to encourage joint working and provides support for funding bids that will challenge and counter extremism. These groups represent a cross-section of the city’s diverse communities and working together helps build trust and cooperation. 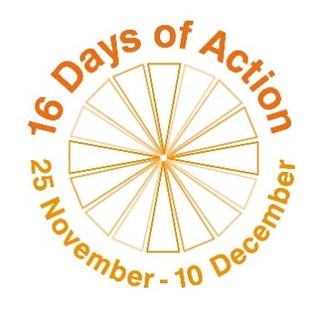 Following the launch of the Domestic Abuse Strategy in June 2018, the Council supported the citywide ‘domestic abuse is everybody’s business’ campaign last Winter. In recognition that workplaces can do more to support and protect employees facing domestic abuse, colleagues wore orange and shared photos and messaging on social media. Broadgate, Gosford Street, and West Orchards were also lit in orange to mark the occasion.