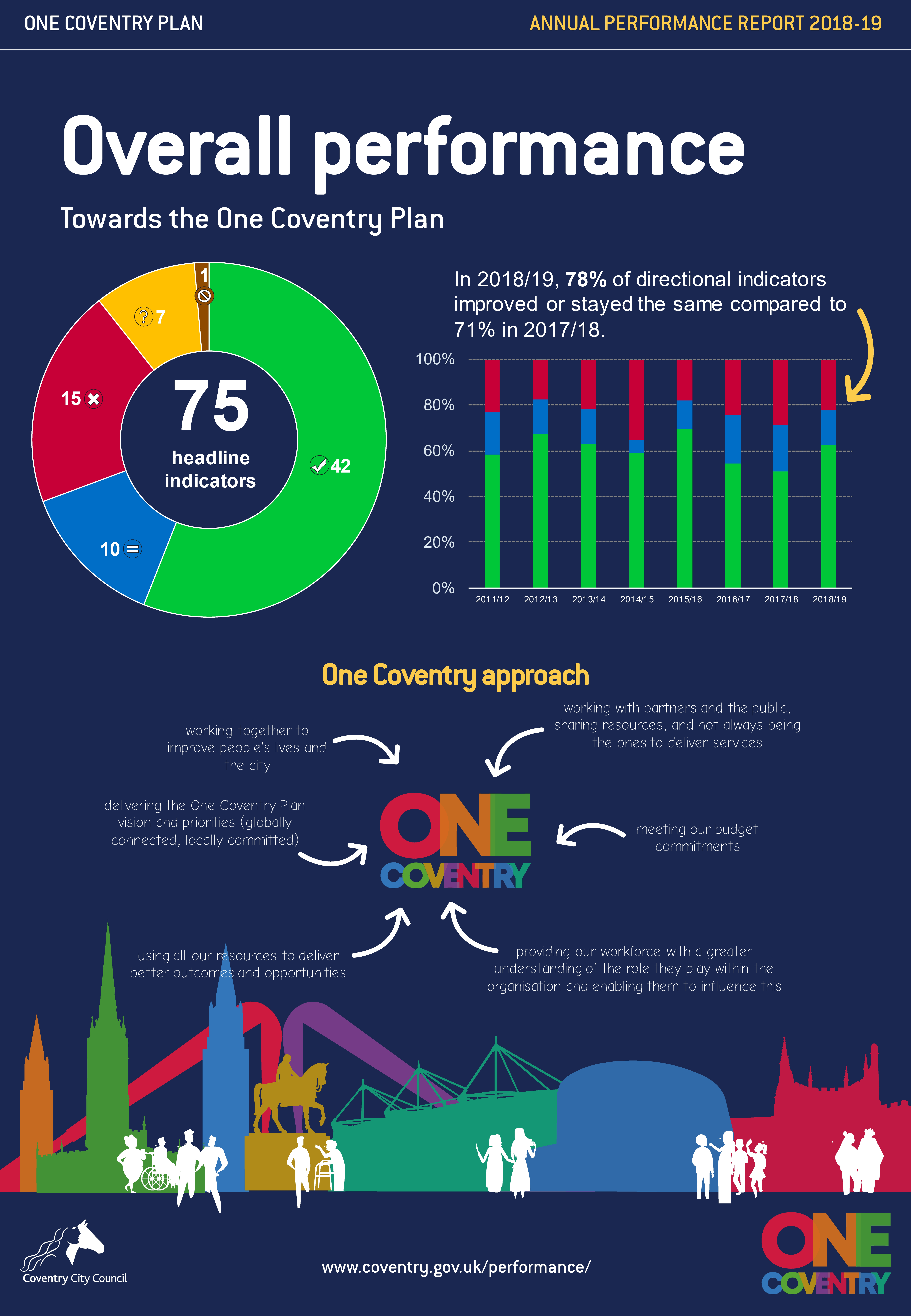 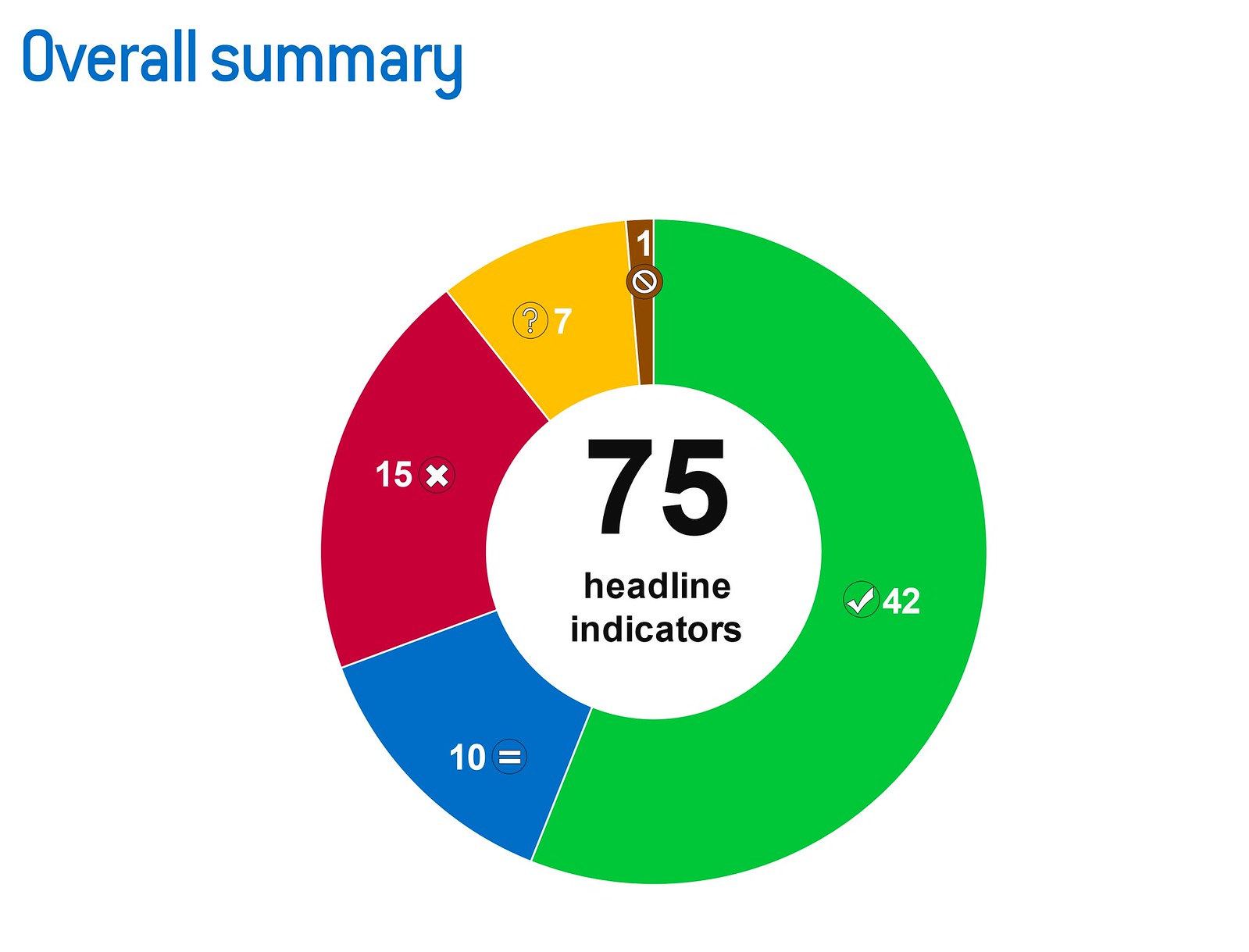 The One Coventry Plan is currently measured using 75 indicators, of which 42 indicators improved; 10 stayed the same; 15 indicators got worse; can’t say for 7 indicators (for example a higher number of domestic violence offences reported may indicate an increase in cases, but may also reflect better reporting and awareness); and progress is not available for 1 indicator (visitor trips indicator).
This means, at the end of year, 78% (52/67) of directional indicators (excluding can’t say or not available) improved or stayed the same. This compares to 71% (42/59) in 2017/18 and 75% (43/57) in 2016/17. 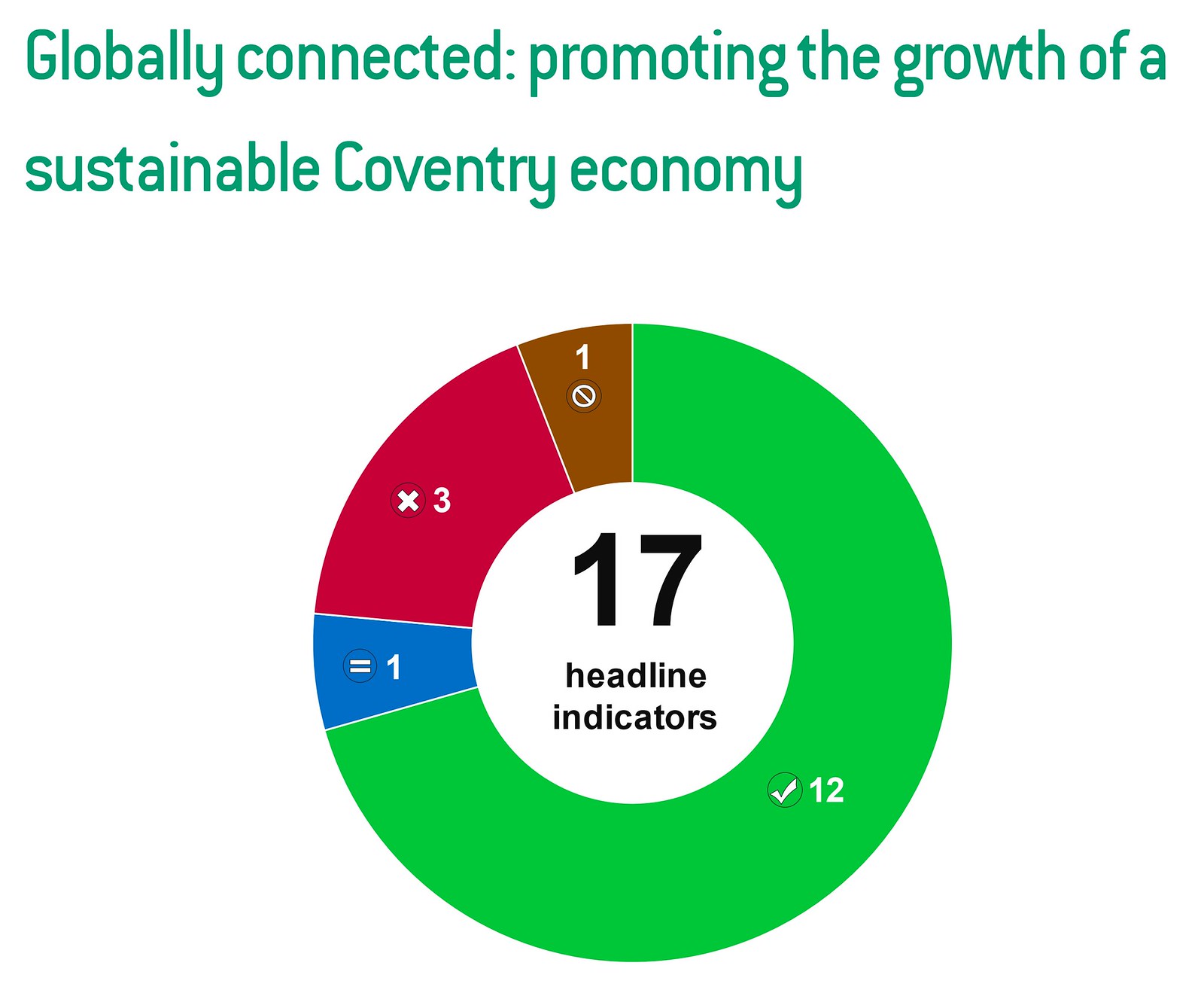 Coventry is a city with exciting and challenges times ahead. Over the years, the city has continually reinvented itself to rise to fresh challenges. As the city steps up to becoming the UK City of Culture in 2021, the city’s economy remains strong and resilient, with a growing advanced manufacturing sector, increasing rates of employment and decreasing rates of unemployment. More residents are working in highly-skilled and higher paid jobs; with over 35% of the city’s residents qualified to level 4 (degree level) or above.
However, significant pockets of deprivation limit some residents’ opportunities to succeed in life, with nearly one in five neighbourhoods considered to be amongst the 10% most deprived neighbourhoods in England. In addition, 10% of the population have no qualifications at all, limiting their ability to gain more rewarding employment in the city.

The city continues to attract external investment, leading to a rapidly changing city skyline – from the demolition of old tower blocks that no longer meet the city’s need, to the construction of new buildings, such as student accommodation and apartment blocks, to meet the changing demands of the city. This is predicted to lead to further private sector investment into the city centre including Cathedral Lanes, the Upper Precinct, and City Centre South.

However, the city is facing a huge challenge around homelessness, both in terms of financial costs and wider outcomes, associations with placements in temporary bed and breakfast accommodation. This year has seen the creation of an integrated housing team bringing together housing strategy, housing options (choice-based lettings) and homelessness prevention; and the bringing together of the Council’s Housing First and “making every adult matter” approach for people who experience rough sleeping, substance misuse and other severe and multiple disadvantage.
As Coventry becomes a “globally connected” city, it will need to address the climate emergency to ensure the city’s future sustainability. Initiatives like improving the city’s air quality and reducing greenhouse gas emissions towards net zero emissions will need a citywide focus. 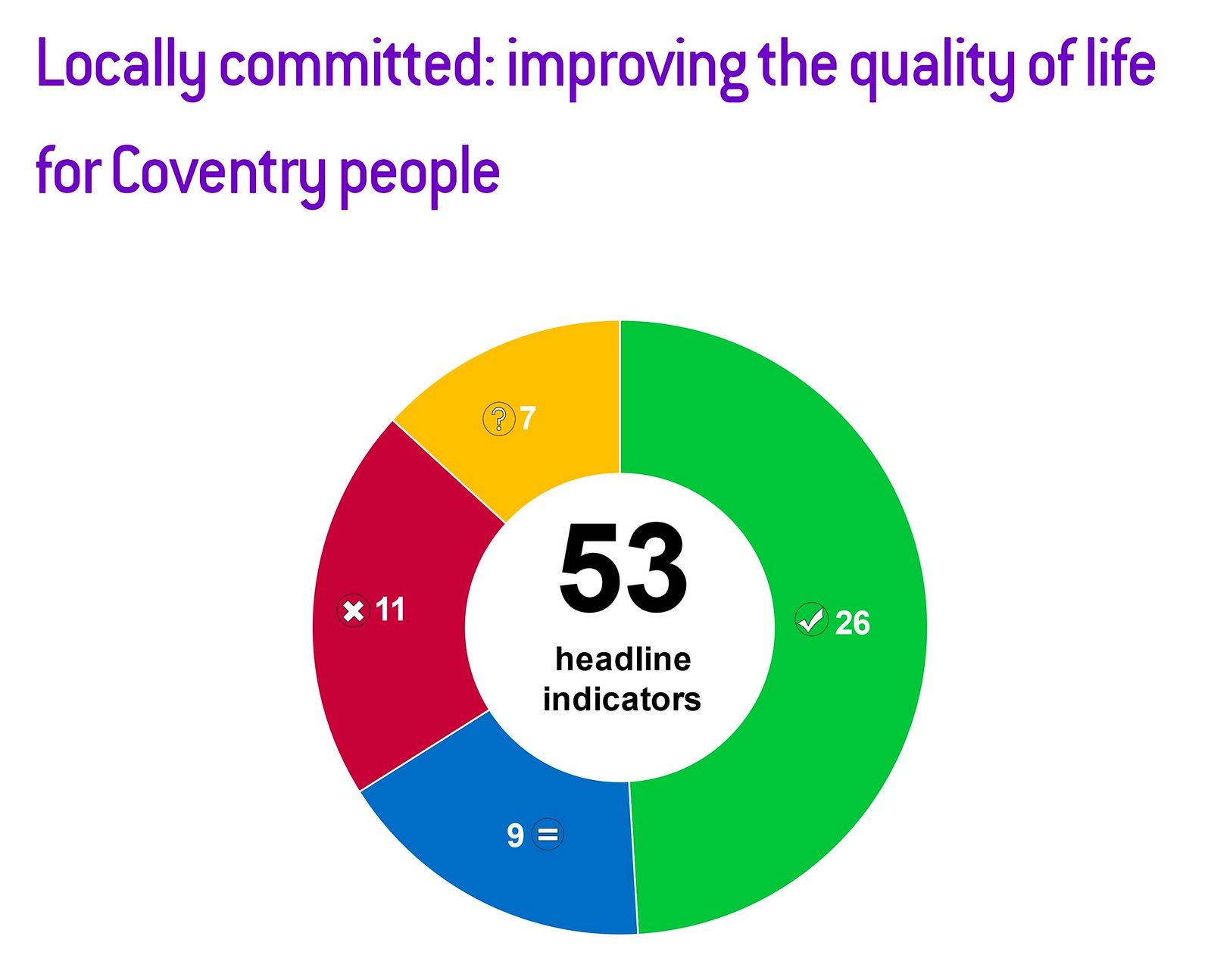 To support the growth of the city’s economy and to provide a pleasant environment for local people, the Council has responsibilities around transport networks, air quality, green spaces and cleanliness. The city’s road network continues to be in a good/acceptable condition, having improved markedly from previous years. However, the city faces challenges around littering and fly-tipping, with a marked increase in the number of fly-tips reported. Despite the increase in fly-tipping, the Council continues to successfully attend to and address the same proportion of fly-tips; and has developed metrics to identify, determine and address the levels of cleanliness across the city.

A person’s lifelong health, happiness and productivity in society are influenced by their early years. The city has seen an increase in the percentage of five-year olds achieving a good level of development. However, this is still below the rates seen in similar authorities and nationally.
The vast majority (95%) of primary school pupils continue to attend schools rated good/outstanding and, compared to the last two years, more pupils finish year 6 reaching the expected standard in reading, writing and. At secondary, over three-quarters (80%) of pupils attend a good/outstanding school, and attainment and progress measures at year 11 have seen improvement.

Social care services in the city have seen a marked improvement, however the sector faces significant and sustained pressures. In children’s services, there has been an increase in the overall number of looked after children, as well as an increase in re-referrals. In adult social care, the number of people in long term support have increased – but remain within the expected range.

Like other cities, there has been a surge in concern about crime and violence, particularly knife crime, and consequential effects on perceptions of safety. The city has seen an increase in crime rates, however rates are still lower than other areas in the West Midlands such as Birmingham or Wolverhampton.

The city is adopting a public health approach to tackling violence, that is, looking at violence not as isolated incidents or solely a police enforcement problem but considering violence as a preventable consequence of a range of factors, such as adverse early-life experiences, or harmful social or community experiences and influences. 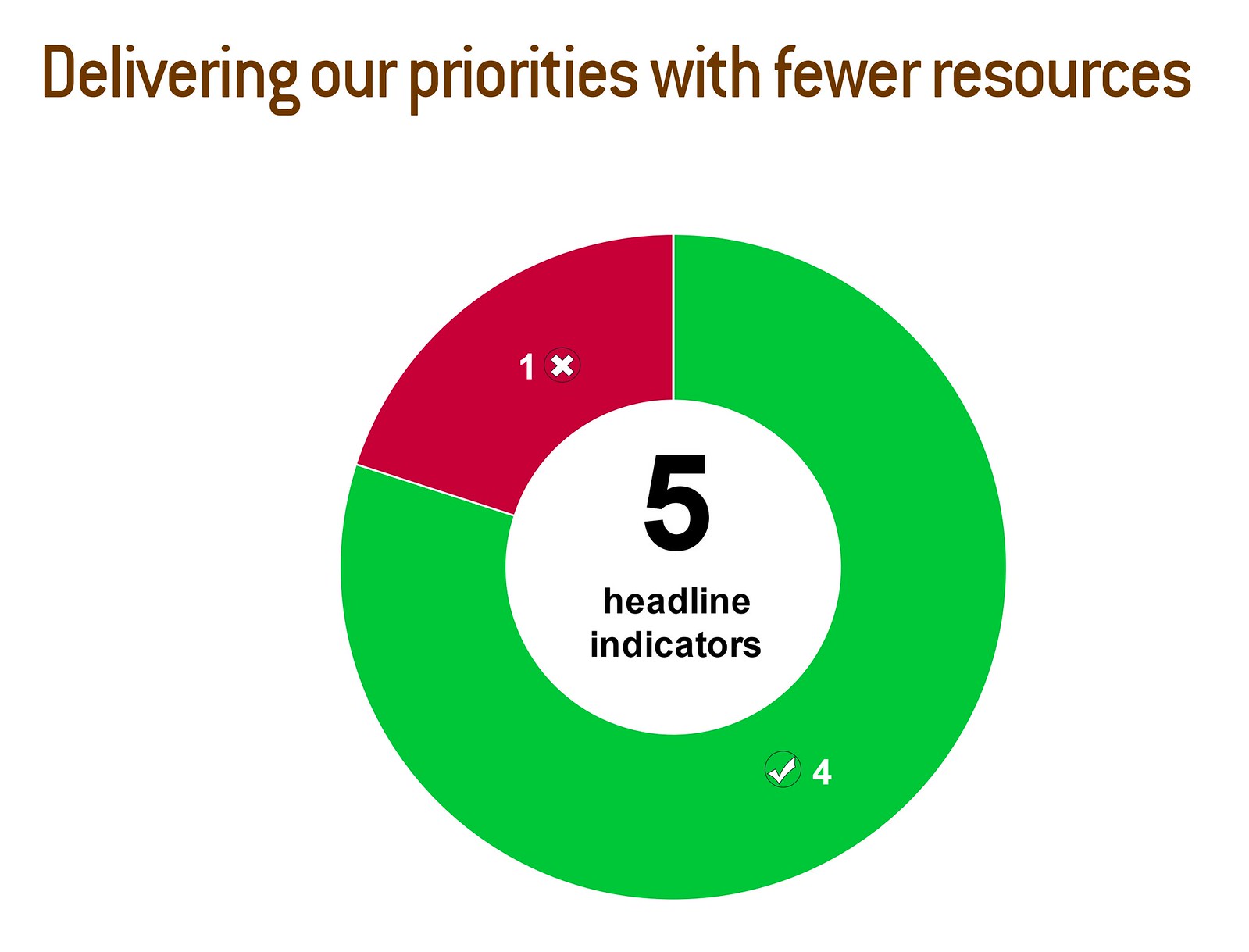 Progress has been maintained in the context of continued and sustained reduction in the overall resources available to the Council: resources available to Coventry through the Local Government Finance Settlement had fallen by £113m in the period between 2010/11 and 2018/19 on a like for like basis – and this is expected to continue, with an expected further reduction of £7m for 2019/20.

This year, the Council has seen a slight increase in its permanent workforce, reflecting reductions in the use of temporary agency staff, and a decrease in sickness absence rates.

The city’s emerging One Coventry approach is working towards ensuring that services in the Council, along with partner agencies and local community groups, work collaboratively to make the biggest positive impact on the lives of local people.