Some residents are benefitting from growth

While good growth in the city has created more well-paid jobs, there also arises a need to address skills shortages by raising aspirations amongst schoolchildren and retaining skilled professionals and graduates in the city.

The number of Coventry residents in employment has been increasing strongly for the last few years. The employment rate is 72%, with 173,100 of 241,900 working age (aged 16-64) residents in paid work. This rate is in line with other similar areas with a high number of full-time students but is lower than national average.

The increase in the employment rate in the last year of just over one percentage point is not statistically significant, but the data gives some evidence that the trend of improvement continued in 2018.

Unemployment in line with national averages 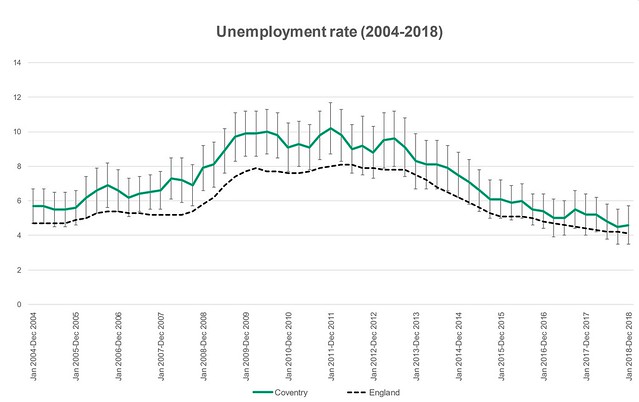 Unemployment rate in Coventry stands at 4.6%, or approximately 8,600 working-age residents. Coventry’s figures are roughly in line with the regional (4.7%) and national (4.1%) rates. National unemployment is at its lowest level in years. Similarly, unemployment in Coventry has been dropping over the medium term and is now notably lower than pre-recession levels. In 2018, the unemployment rate amongst Coventry residents fell a little, continuing the positive medium-term trend.

The claimant count, a measure of the number of residents who are claiming jobseeker’s allowance or claiming universal credit due to unemployment, stands at 6,000 people, compared to the unemployment estimate of 8,600. The claimant count is highest in Foleshill and lowest in Wainbody.
Universal credit full-service went live in Coventry in July 2018, where claimants for several benefits began the transition to claiming universal credit. It was predicted that the transition would be challenging for some claimants, with potential delays in receiving payment; a wider group of people are required to search for work; and there are stricter conditions on what claimants are required to do to receive payment.

Increasing qualification levels but still some challenges and skill shortages

35% of Coventry’s working aged residents, or around 85,400 people, are now qualified to level 4 (degree level) or above. Coventry now performs better on this measure than the West Midlands average or in similar areas.

Coventry benefits from a ‘graduate gain’ thanks to the number of students at the city’s two universities; however, graduate retention is low with only 15% of students staying to work in the city following graduation.

One in ten working aged residents have no qualifications

Almost a tenth of working aged residents (24,900 people) in the city have no qualifications. This is worse than the England average (8%) but is comparable to region (10%) and similar areas. A lack of qualifications may limit residents’ ability to gain more rewarding employment. However, many of the residents with no qualifications are aged 50 or over and are already in employment.

8% of Coventry firms who responded to the national Employer Skills Survey 2017 said they had at least one skills shortage vacancy and were finding it difficult to recruit to a job because the candidates did not have the required skills. Additionally, 12% of Coventry firms said they had skills gaps whereby at least one of their employees did not have all the skills required for the job. 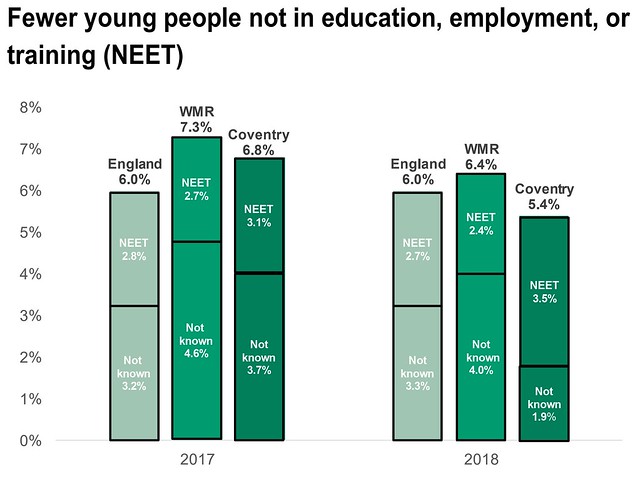 Employers with a pay bill of over £3 million each year, including Coventry City Council, pay into the government’s apprenticeship levy scheme to fund apprenticeship programmes. Funding can be retained by the employer if it goes towards apprenticeship training and assessments.

In 2018/19, the Council spent £524,540 of apprenticeship levy funding, supporting 79 new apprenticeships in the Council and local authority schools and providing 99 qualifications for Council staff. 12 types of courses were offered, including civil engineering, catering and professional chefs, accountancy, taxation, and play work.

The Pod hosts the city’s Time Union, which is a system of mutual exchange where members share their time, assets, and skills on an hour-for-hour basis. Members of the Time Union have exchanged cinema trips and lessons in languages, fitness, DIY, career, life coaching, film-making, and crafts.

Previous Raising the profile of Coventry and its arts, sports and cultural opportunities Next Reducing the impact of poverty