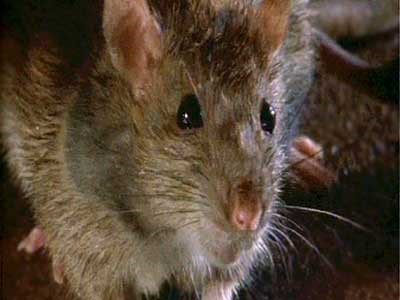 There are two types of rat in the UK.  The most common rat (Rattus norvegicus) also known as the brown rat, or sewer rat is found all over the country. The smaller and rarer black rat, or ship rat (Rattus rattus), is largely confined to the major dockyards and cities on the coast.

The common rat can vary in size and colour, typically though the common rat is brownish grey on the back and grey underneath. Their weight varies between 100 grams to 500 grams with the average weight being around 335 grams, with a combined head and body length of anywhere between 200 mm – 270mm.

Rats pick up clues about their surroundings using their senses, without these the rat's survival would be threatened.

Gnawing is part of the main behaviour of rodents and is not normally associated with a search for food. Gnawed material is rarely swallowed or tasted and if gnawing is not carried out then the teeth will deform leaving the rat unable to feed normally resulting in death.

Burrowing plays a major part in a rat’s life and the rat has several reasons for doing this. Firstly, it acts as an escape and can be used for resting and nest purposes and they are quick to exploit holes and cavities in buildings for these purposes along with stockpiling food in them.

Rats are very good climbers and can climb vertically if the surface is rough enough, rats also find swimming easy and do live in banks in rivers, canals and ditches.

The most common signs of infestations are actually seeing rats themselves and noises in loft spaces and roof spaces. Other signs are droppings, urine and its smell, dark smears and rub marks on all types of wall and floor junctions, gnaw marks, rat runs on the floor and top of walls, paw marks and tail swipes in powder etc, holes up to the size of a golf ball.

The rat is considered to be a pest due to its effect upon humans. One of these reasons is its ability to transmit disease to humans and livestock, with its ability for damage foodstuffs and structures being another. Many people find the mere mention of rats abhorrent and frightening, this alone can be a reason for control.

Rats carry a number of diseases, in and on them, that can be harmful to people. For example Leptospirosis (Weils Disease) and Salmonellosis (food poisoning).

Food loss is another reason for control. Rats are responsible for the contamination of food products that can result in foodstuffs becoming a total loss, or it being downgraded for animal purposes only.

Structural damage from burrowing and fires is also a problem. Electrical wiring is a common "gnawing target", which may lead to fires and a risk to people's lives. Burrowing in and around sewers can lead to water escape, which may, ultimately lead to structural damage to buildings from subsidence.

Information about rats is also available to download for reference.