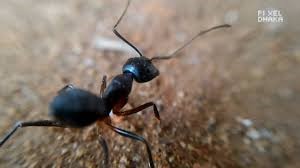 The ant that you are most liable to come into contact with is the common black ant, also known as the garden ant (Lasius niger).

Commonly found throughout the UK, the common black ant starts its cycle with a mated winged female digging into the earth to produce a single cell. After 3 - 4 weeks the larvae are mature and pupate. After another two weeks the adult ants emerge, these will be made up of entirely workers. Now that the workers are born they tend to both the queen and the nest in turn. They also extend and enlarge the nest whilst actively protecting the queen and all occupants.

Sometime in the late summer, particularly on more humid days, winged and sexually mature males emerge from the nest along with the larger winged females. These then fly away on the wing and mate causing a nuisance to people in turn. Once they are exhausted the males die quickly with only a few mated females surviving to start the process over again next year.

The worker ants collect a number of food materials such as:

Inside a domestic house or kitchen they feed on small amounts of food debris that is split and that ends up under surfaces and units. This is on the main reasons for infestations in the situations mentioned above.

Usually the only sign of infestation is actually seeing the ants themselves on surfaces in buildings along with seeing ants outside. Again “flying” ants can become a nuisance in the summer due to their huge numbers.

The reason for control of ants is very much a purely individual issues as one successful foraging worker coming across a suitable sugary substance is able to communicate the information to her co-workers, with the inevitable vast numbers of worker ants invading and incidentally contaminating suitable human foods. Ants are not “dirty” insects, however, they must cross unsavoury and unclean areas during their foraging and this leads ants to invade buildings to be deemed unacceptable and to be classed as a pest.

The black ant is not known to transmit any serious disease organisms to humans. Good hygiene in a food place along with a good treatment programme is the best course of action to take.

Information about ants is also available to download for reference.