The alternative rock trio will be bringing their electric style to Coventry Central Library this November, in collaboration with Get it Loud in Libraries. 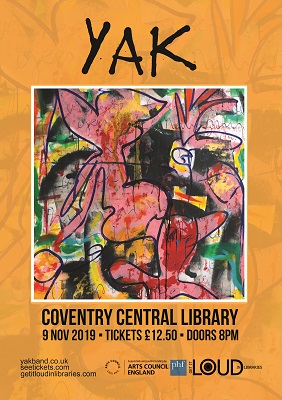 Yak’s live performances are a truly unique experience.  The band’s 2018 London show was described by Gigwise as ‘pure unadulterated insanity’ and the Guardian has described the band as a ‘Force of nature’. The band will be performing in the Coventry Central Library on Saturday 9 November, as part of their upcoming UK headline tour.

Get it Loud in Libraries aims to get young people who love music into libraries to see live bands. Previous bands to have appeared as part of the Get Loud in Libraries project in the UK include Clean Bandit, Ellie Goulding, Florence and The Machine and Frank Turner.

“When the Central Library was the Locarno, it played host to musical legends like The Who, Pink Floyd and the Specials. So, it’s only fitting that we honour the buildings legacy by hosting another fantastic Get It Loud in Libraries show.

“Get it Loud in Libraries have bought many fantastic bands to Coventry over the last few years and we’re expecting this to be another great show.

“It’s brilliant that projects like this exist to get people who love music, especially young people, into libraries and enjoying themselves.”

Find out more about the Get it Loud in Libraries project.