Bin lorry drivers are on strike. We apologise but this is out of our control. Thanks for your patience. 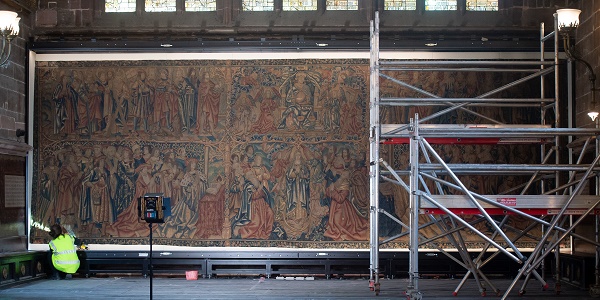 The stunning tapestry is located in St Mary’s Guildhall, Coventry.

Dating back to the turn of the 16th Century, it has been reinstalled at the venue after the completion of detailed preservation work.

The restoration of the artefact has helped to preserve the Tapestry, and the details and colours have been revealed.

Dr Mark Webb an academic archaeologist specialising in the late medieval period, and also a trustee at Historic Coventry Trust, visited the tapestry and joined conservation specialists to take a closer look at the final restoration work.

He said that he felt quite emotional seeing it back in place and said it is the oldest in Britain still hanging on the wall for which it was designed - decades older than the more famous Hampton Court tapestries.

He added: “The tapestry deserves to be much better known. Although it was woven at the beginning of the 16thcentury, probably during the reign of Henry VII, it depicts a scene 60 years earlier.  The 1450s was a golden age for Coventry when the city became the headquarters of the Lancastrian royal family during the early years of the Wars of the Roses. Indeed, the central figures on either side of the Virgin Mary are King Henry VI and his queen, Margaret of Anjou.

“It’s a work of international importance, relatively unknown outside academic circles, and is on par with other wool and silk Renaissance tapestries hanging in the V&A, the Metropolitan Museum of Art in New York and the Louvre in Paris. Woven in Flanders, it was a specially commissioned work and is likely to have been hugely expensive.

“The cleaning process has highlighted a number of areas that deserve further research such as the realistic faces of many of the characters including the beards of the courtiers and saints, and the fine weave of the royal costumes".

The Tapestry which features two central figures believed to be King Henry VI and his Queen, Margaret of Anjou, records Coventry’s status as the regional capital of the Midlands in the years 1480 to 1520.

Marina Herriges, a textile conservator with Textile Conservation Limited, who worked on the restoration work, added: “We removed the old lining which was a bit degraded and more than 30 years old. We surface cleaned the whole tapestry using a low suction vacuum and gently wiped it.

“The way we have fitted the Velcro hanging mechanism means when it is now displayed it is much flatter. We are really pleased with how it is now looking.”

Textile conservators visited the Guildhall in November when they removed the Tapestry to carry out conservation treatment on the artefact.

The conservation and redisplay of the tapestry has been made possible as part of over £1.4m support towards the wider project from The National Lottery Heritage Fund thanks to National Lottery players.

The work on the Tapestry is part of a £5.6m redevelopment of St Mary’s Guildhall supported through the Cultural Capital Investment Fund, which is resourced from Coventry City Council, Arts Council England, and the Government’s Getting Building Fund – through Coventry and Warwickshire Local Enterprise Partnership also supported by Heritage Fund.

Councillor David Welsh, Cabinet Member for Heritage in Coventry, said: “I’d really like to thank everyone involved, the Tapestry is stunning. It’s important to the city’s rich heritage, and local people and visitors will soon get to see and understand much more about its fascinating history.”

The tapestry is displayed with a new casing, and in a way that visitors to the Guildhall will be able to see much more clearly.

New interpretation programmes, including a digital tour and interactive activities have been developed to explain the story of the tapestry and enable visitors to clearly see and understand more about the beautiful artwork.

Cllr Welsh added: “There is extensive work happening to sensitively restore and refurbish many important parts of the Guildhall and this has been done with external investments of £5.6m that we are very grateful for. It will breathe new life into the Guildhall which will be a key visitor attraction in the city.

“The Council is working closely with a range of partners, to redevelop, refurbish and restore more than a dozen impressive cultural capital schemes that are underway or completed, with more than £40m of external funding.”