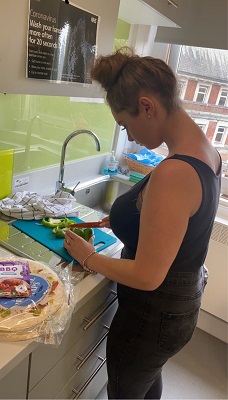 The new scheme supports young people as they build confidence and gain independence while living in their own home.

Young people leave care between the ages of 16 and 18 without the financial and emotional support of family and the House Project aims to help fill that gap.

The Coventry House Project, which launched in 2021, is one of 16 projects across England and Scotland that make up the wider National House Project. The national scheme is working with 380 young people and has helped 240 young people to make the transition to living in wider society.

Young people support each other to develop the skills, knowledge and confidence to leave care in a planned and supported way and they work alongside adults to do up properties that become their homes.

This provides the foundation for them to them to live independent and fulfilling lives.

The House Project in Coventry works with Citizen Housing to identify suitable properties and a group of around 12 young people aged 16 to 17, were the first through the doors, 12 months ago.

They adopted the name ‘House Project Sunrise’ and for the past year they have learned about day to day tasks such as cooking, money and bills, personal safety and finding out how to shop smartly.

They have now all successfully ‘graduated’, completing their AQA accredited portfolio.

They have all taken part in twice weekly group sessions and one-to-one sessions. They have support when needed, and they also have the support of other members of the group.

They have also been helped to build links with local employers and training providers to get their properties ready and build connections for pathways into the world of work. They have attended conferences, heard from guest speakers and raised money for the homeless.

Out of the 11 young people, six have already moved into their own homes.

Cllr Pat Seaman, Cabinet Member for Children’s Services, said: “The House Project is such a wonderful idea and it really has been a great success.

“The young people have all worked very hard and they have shown maturity and a determination to move on and start to build their lives. They should be very proud.

“Now we are ready to welcome our second intake, and we wish our graduates every success and happiness in their new homes.”

John Gregg, Director of Children’s Services in Coventry, said: “Leaving care and striking out on your own can be a daunting prospect and young people have to learn a lot of new skills very quickly.

“The House Project is a brilliant way to help them start out, as they have the support of trained social workers as well as the others on the scheme and they can build confidence and skills as they go.

“Congratulations to the young people and to all the dedicated team who helped introduce the House Project to our city and make it such a success. I look forward to seeing it go from strength to strength in the years ahead.”

The young people involved had high praise for the project, with comments including:

As well as a more formal graduation event, the young people are also planning a trip to Drayton Manor.

The second group of young people is being welcomed into the House Project this summer.,

To learn more about the scheme, visit the House Project website.