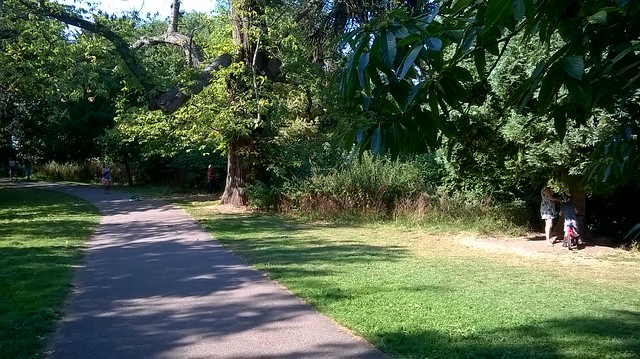 This picturesque historic park nestles between established housing developments offering a unique parkland experience with its rolling landscape and established tree stock. Visitors can marvel at the unspoilt expanse of green space while walking around the park on the tarmaced footpaths, which is also a well used dog walking venue. Families with children can also enjoy using the recently provided equipped and natural play area while also being able to have a picnic on the grass close by.

The recent improvements in the park have had the active involvement of local people and the Friends Group who organise weekly working parties each Tuesday afternoon. The most recent improvements have seen the removal of the old paddling pool and base of the former play area and these areas have been top soiled and sown with wildflower seed mix to establish a meadow, local school children carried out the seeding.

The park has also been awarded a Green Flag Award, this is a nationally recognised award given to parks that, when assessed, meet or exceed some eight criteria set by the Awards Body.

The Parks Service Rangers have restarted work on laying the hedge opposite the walled garden, on the boundary with Allesley Hall. Work on this project stopped early last winter to avoid damage to the snowdrops, and had to wait until the trees started to become dormant again, and until the birds had finished nesting. Hedge laying is an ancient craft which prolongs the life of hedge, and thickens it (which improves it for wildlife, such as nesting birds). The individual trees and shrubs selected to be laid (known as pleachers) are cut part of the way through and laid down, the remaining wood in the hinge is enough to allow water and nutrients to pass up the stem.

The hedge is being laid in the traditional local style ‘Midlands Bullock’, which was designed to be strong enough to contain cattle, as they are prevalent in local livestock farming. The hedge is strengthened with hazel stakes, hammered into the ground, and hazel bindings (or heatherings) twisted across the top. These stakes and binders have been harvested from local woodlands by coppicing, which also prolongs the life of the trees and increases woodland biodiversity by promoting new growth, and allowing more light to the woodland floor.

The Rangers have also felled a large laurel in the same area. Laurel is a non-native plant which can be very vigorous, and can release chemicals into the soil to reduce competition from other plants. Removing it has prevented it from taking over, and has also opened up a lovely view across the park.

Telephone
024 7667 6580
Facilities
History of the park
The park was originally a deer park in the 13th century when it was first enclosed around the remains of a Norman 'Motte and Bailey' castle. The park which formed the grounds of Allesley Hall (now a residential home) enjoys a wealth of mature trees and shrubs and contains a walled garden, which is maintained as a Georgian kitchen garden by a local voluntary group. The walled garden is currently being restored to the days when it supplied fruit and vegetables for the hall's owners and servants. Walled garden volunteers organise educational events and activities in the garden to celebrate its history.

There is an active Friends Group.
Opening hours
The park pavilion, golf course and crazy golf are open from 9.30am - 4:00pm.

Golf Special Offers: Student rate golf - Wednesday and Thursday only upon providing a valid student card (NUS or ISIC) the customer is entitled to the student rate of: APG £3.80.

Crazy golf including equipment £3.00 per person.