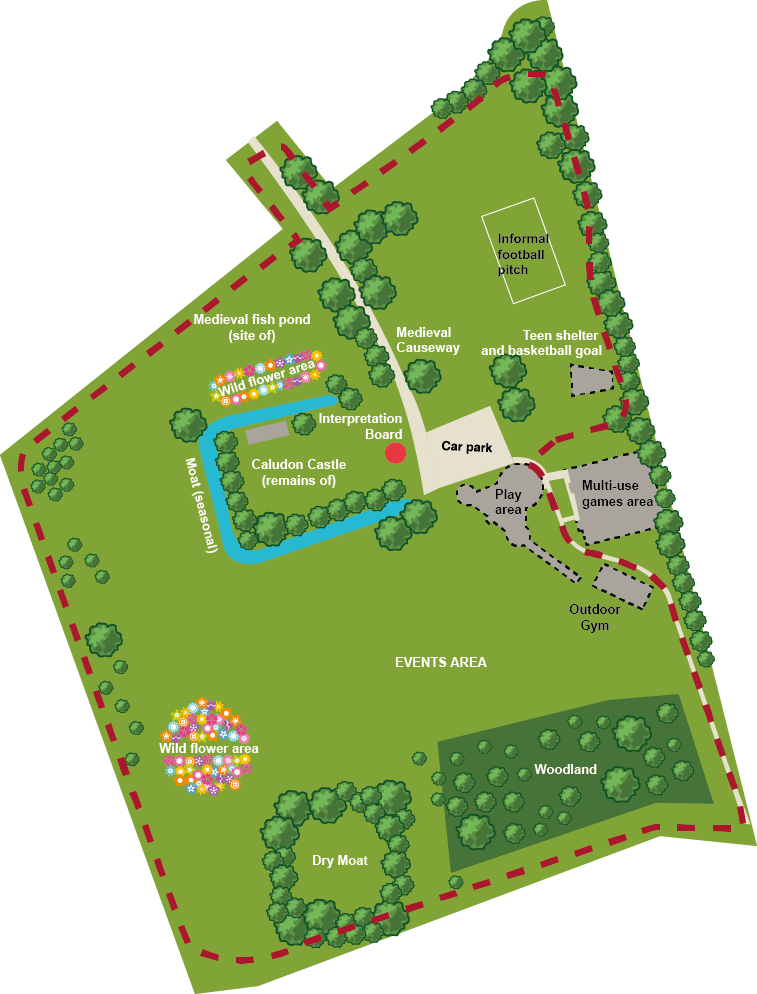 Caludon Castle Park is FREE to enter. It is located three miles to the east of Coventry city centre and it is the Area Park for the South of the city. Although smaller in size than other area parks, it offers a valued green space experience for local people. The site contains two scheduled ancient monuments by English Heritage, including the remains of Caludon Castle which is Grade 1 listed.

The park is accessed by vehicles off Farren Road via the St George and the Dragon inspired entrance gates, along a causeway to the recently re-furbished public car park. The park is informally divided into zones including sport and play to the east and the historical features to the west and north.

The Park is annually entered for a Green Flag Award. This is a nationally recognised award given to parks that, when externally assessed, meet or exceed some eight criteria set by the Awards Body. These criteria include how the park is managed, community involvement and sustainability.

The Park has been awarded a Green Flag for the last three years. Recent Improvements to the Park include the entrance gates, refurbished drive way and car park and a new play area. There is a Friends group for the park.

The weather has finally decided that it is winter, all be it a fairly mild one so far. We have seasons because the earth is tilted (wonky) as it makes its yearly journey around the sun. The Earth's axis is tilted at 23.5 degrees, this means the Earth is always pointing to one side as we go around the sun.

We lean towards the Sun in the summer and away from the Sun in the winter. This means with shorter days and longer nights the Earth has less chance to heat up leading to colder weather generally. Some species are still feeding and building up fat ready to survive the colder months to come. Because it has been mild you may have seen Autumn Juvenile hedgehogs still foraging, if feeding them please feed dog or cat food, not bread and milk as this can cause diarrhoea. Hedgehogs numbers are declining nationally. There are many reasons for this, More intensive agriculture – with larger fields and the loss of hedgerows and permanent grassland – has probably played a role. The use of pesticides too reduces the amount of prey available. In towns and villages, smaller and tidier gardens with fencing that prevents hedgehogs moving between gardens may have reduced suitable urban habitats. You can help by planting a hedge instead of having a fence or simply by making small holes in walls or fences so they can move freely around in search of food and mates or providing rough areas for shelter.

If we all do a little we can achieve a lot for hedgehogs. More hedge planting took place with Caludon School pupils recently to further enhance the parks boundary. The wildflower area has now been cut (and collected as this reduces soil fertility which is good for wild flowers) and to reinforce this new feature it will be re-seeded in the Spring.

In addition to the expanse of green space, the park facilities include:

The car park is free to enter.

The park has an active Friends Group and in addition to supporting events and activities in the park, they were successful with a submission for an external finding bid which helped improve the park entrances, the play area and to undertake environmental improvements.

Distance markers
1300m metres on footpaths
History of the park
The Historical and Archaeological Study of Caludon Castle records that the first house was erected on this site at around the end of the 12th century, further buildings were added or rebuilt with the main building location moving further north from its original position, to include a fish pool, during the subsequent centuries. Today, only part of the banqueting hall wall remains together with evidence of the area occupied by the fish pool.
Outdoor gym equipment
Caloo Leg Press
Caloo Tai Chi Wheel
Caloo Workout Boxes
Caloo Lat Pull and Chest Press Combi
Caloo Upper Body Workout
Caloo Cross Rider Duo
Caloo Arm Bike
Opening hours
April - 9:30am* to 6.30pm
May - 9:30am* to 7:00pm
June - July 9:30am* to 8:00pm
August - 9:30am* to 6.30pm
September - 9:30am* to 5:25pm
October - March 9:30am* to 3.00pm

Outside of these times the vehicle gates will be locked.
Map
Directions