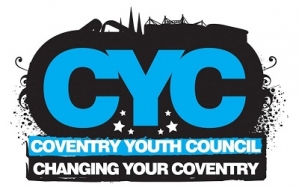 Coventry Youth Council are a group of young people aged between 11-21 who want to have a say about the decisions that are made in the city. We work with lots of different organisations, including the NHS, Coventry and Warwick Universities, CAHMS, Grapevine, Live UnLtd, West Midlands police and the Council.

We do yearly campaigns on issues that affect young people in Coventry and aim to raise awareness to tackle these issues.

The Coventry Youth Council members are:

Here’s what our members are up to:

I’m Sean, I’ve been coming to CYC for over a year, and I’ve gained so much from the experience. I’ve went onto become a Police Youth Crime Commissioner for Coventry, became part of the independent advisory group for Mental Health and the Police as well as participating in many different campaigns across Coventry, gaining skills, good friends and a lot of confidence.

I'm Noah. I first came to be a part of CYC after hearing about it from an old music teacher after I expressed an interest in politics and wanting to become involved at least a local area. CYC is an excellent organisation in catering to the views and opinions of any individual who wants to be involved in making the City of Coventry a better place. Not only is it a ‘hub’ for all who attend to discuss major events at home and abroad, it is a fruitful scene of debate on topics ranging from Brexit to children’s use of social media. The fact that the group is so diverse means that there is never a dull moment. Anyone who is interested in gaining confidence as a speaker, wants to have a good debate about an issue, or get involved in a city-wide awareness campaign, then CYC is unquestionably the group for you.