The ESAG can be utilised as a tool in developing the safety of events and other similar public mass gatherings, to offer guidance to help event organisers discharge their responsibilities and to encourage an ethos of continual improvement.

The policy objectives listed below will be applied to try to ensure the viability of events wherever possible and not to unnecessarily discourage community groups with limited funding. However, the health, safety and welfare of performers, staff and public is of primary importance throughout and so the policy will endeavour to: 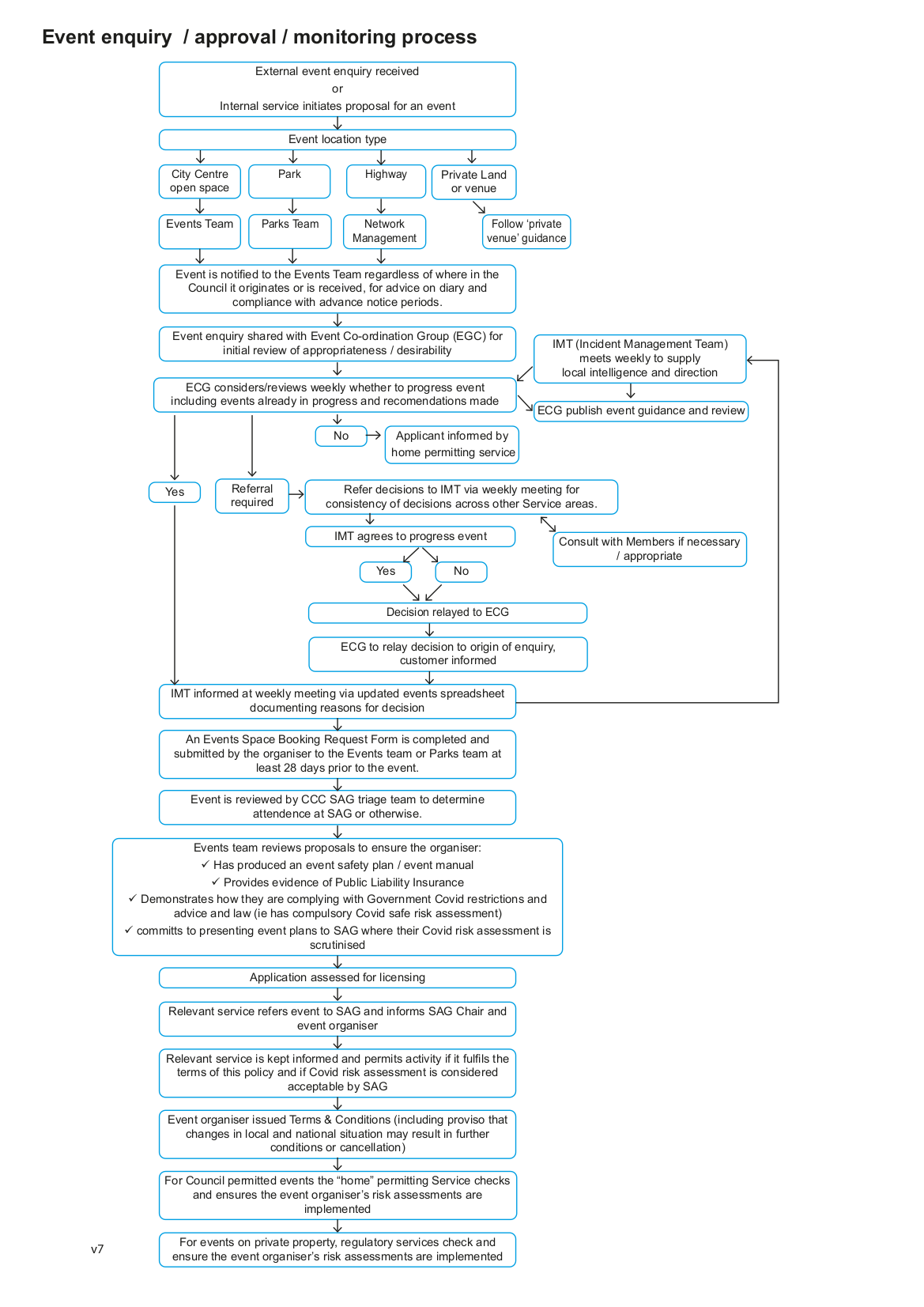 Status and conflicts of interests for SAG members

These need to be checked by each signatory to the Policy Document and potentially by line managers and legal departments.

In simplest terms, those core members will be from the same statutory bodies who consist of the Category 1 responders within the Civil Contingencies Act (CCA) 2004. Those would include: Local Authorities, Police, Fire, Ambulance, Coastguard, NHS Primary Care Trusts, Health Protection Agency, Ports Health Authorities and the Environment Agency. However, only those applicable to the area or event would be called upon, for example, the use of the Coastguard would be unnecessary for most events in Coventry.  In many cases, hospital trusts are represented by the local ambulance service, but it is important that in these circumstances, West Midlands Ambulance Service (WMAS) are relaying details of events to hospitals to allow them to plan any response.

Ideally ESAG members will have a specific E-mail address which is not their own ‘in house’ work Email, but a generic one that can be switched to another user if that person moves on or can be monitored whilst they are on leave. So [email protected] or [email protected] would be more appropriate. Each ESAG member should have a deputy who can support them and be able to undertake their role if they leave their organisation or are unable to continue with their duties.

These should include officers with the competency to advise on matters such as Event Planning, Licensing, Food Safety and Environmental Health, Public Protection, Emergency Planning, Highways and Traffic, Public Health when/where appropriate, Health and Safety and any other officers as required to discharge their duties as appropriate to their position as a Category 1 Responder under the Civil Contingencies Act.

Police representatives attend with regard to matters such as public order and public safety, incident response planning, community policing, enforcement and any other duty as appropriate to their position as a Category 1 Responder under the Civil Contingencies Act. Their roles will be confined, unless agreed otherwise to those defined in the ‘Approved Police Practice’ (APP) for Events under The National Police Chief Council (NPCC) protocols. Core principles (college.police.uk)

Fire and Rescue representatives attend with regard to matters such as public safety, incident response planning, provision of advice on matters relating to fire safety and evacuation, enforcement and any other duty as appropriate to their position as a Category 1 Responder under the Civil Contingencies Act.

WMAS representatives attend with regard to matters such as incident response, medical provision advice and guidance, consideration of a private medical company’s medical plans, the impact of the event upon local medical and transport arrangements and any other duty as appropriate to their position as a Category 1 Responder under the Civil Contingencies Act.

Attendance by the Trust representatives may only be necessary for the largest and most complex events and those of high physical risk. However, as a minimum, they should be kept informed of events, likely road closures and any events close to medical facilities.

It is expected that all matters of cost are met by each agency, but where external expertise or advice is necessary, costs of such a service should fall with organisers of events after discussion with them.

These are the representatives who will be called to specific ESAGs and for specific reasons rather than each one.

The event organiser may be called to all ESAGs but it may be appropriate from time to time for the authorities to discuss the event without the need for them to be present, for instance if wishing to prepare a list of questions for a future ESAG about that event.

An event organiser is responsible for planning and production as well as all health, safety, and welfare related matters for those affected by the event including visitors to the event, staff or volunteers working at the event, contractors and others such as neighbours and responding emergency services personnel. It is worth occasionally reminding organisers of their wider responsibilities under Section 3 of the Health and Safety at Work Act 1974 to those not employed by them but to those affected by any work-related activity, including neighbours and the public generally.

Their responsibilities will include but are not limited to:

Coventry ESAG strongly recommends that an event organiser engages with residents or the communities affected by the event, however, Coventry ESAG considers that in general this should take place outside of the ESAG.

There are three primary reasons for this:

Local Authority representatives who are not part of the core team.

As deemed appropriate: Child Protection, Communication/Media, Legal Services and others would not be considered ‘core members’ but whose presence at specific meetings may be beneficial to the group as a whole.

The role of the secretariat is to:

The ESAG will consider as a group the establishment and maintenance of an events diary for its area. Encouraging its use will over time give a clearer picture of those events that ESAG will need to focus its attention upon.

The processes of the ESAG will be published and available via links on the council website but also those of the ESAG members. There is still a wide assumption that police are the ‘go to’ organisation when seeking permission for events and the referral back to a council web site and the events diary will encourage and educate the public accordingly.

A form will be developed that can be completed online by event organisers and in a simple format permitting organisers to submit a notification of an event of any scale in the first instance directly to the Event Team.

The notification form will permit council officers to use a simple scoring matrix as a triage / filtration process in deciding whether the event should be subject to a full ESAG, ‘ESAG light’ or no follow up. This will be recorded. In undertaking even this process, an ESAG process of some kind has been undertaken.

Once an event has been triaged, the completed triage forms will be saved in a SharePoint folder and will be shared with all members if necessary.

Decision making regarding Full ESAG, ESAG Light or No ESAG

A decision as to whether an event requires full, light or no ESAG should be made and notified to ESAG members based upon the responses. Where only one organisation requires a fuller ESAG process, the matter(s) that concern them may be manageable in direct conversation with event organisers, but the outcomes should always be notified to other ESAG members.

This Policy Document will ideally be reviewed annually but in any case, at least every two years. If following any significant learning, change in legislation or guidance or other just cause is felt by its members, the Coventry ESAG will review its own procedures and Terms of Reference (ToR) at will to ensure they remain appropriate, fit for purpose and in line with current guidance and best practice.

This document must be reviewed once recommendations of the Manchester Arena Inquiry have been published and again when the proposed ‘Protect Duty’ legislation (Martyn’s Law) is introduced.