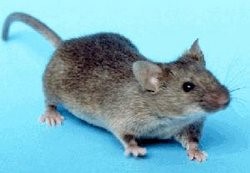 There are several types of mouse in the UK. There is the more common mouse (Mus domesticus), which you are most liable to come in contact with and the slightly bigger wood mouse that prefers to live outside.

The mouse can vary in size and colour and can appear to be black brown, grey or even sandy coloured, typically though the mouse is brownish grey on the back and can vary from white to grey underneath. They weigh usually up to 28 grams with the average weight being around 15 grams with a combined head and body length of anywhere between 70 mm – 90mm commonly.

Mice pick up clues about their surroundings using their senses, without these the mouse's survival would be threatened. Out of the five senses sight is the minor sense that they use the less.

Mice have the ability to reproduce at an alarming rate every 4-6 weeks; they can produce a litter capable of reproduction in just 12 weeks.

Gnawing is part of the main behaviour of rodents and is not normally associated with a search for subsidence, gnawed material is rarely swallowed or tasted and if gnawing is not carried out then the teeth will deform leaving the mouse unable to feed normally resulting.

Mice do occasionally burrow eg. (poultry houses and barns).  Mainly though the mouse uses existing holes and entrances to gain access. It uses these for entry purposes along with using the cavities in buildings for nests and stockpiling food in them. They will enlarge any suitable hole by gnawing to gain access.

Mice are very good climbers and can climb vertically through the use of cables wires etc. Mice can also jump up to 25cm but do tend to avoid wet conditions where possible preferring drier conditions, but are capable of swimming if necessary.

The original staple diet of mice was grain based but due to migration into urban areas their diet has changed. They will still eat anything grain based but also have developed a taste for such foodstuffs as meats, fish, vegetable matter and insects. Their diet will consist of anything that is available to them and in urban areas their diets can be the same as humans.

Mice are very erratic in their feeding patterns preferring to feed on several different feeding sites rather than one or two like rats.  If undisturbed, mice will quite happily feed in the day although they are mainly nocturnal.

The most common signs of infestations are actually seeing mice themselves and noises in loft spaces and roof spaces. Other signs are droppings, urine and its smell, dark smears and rub marks on all types of wall and floor junctions, gnaw marks, paw marks and tail swipes in powder etc, and holes up to the size of a golf ball.

The mouse is considered to be a pest due to its effect upon humans. One of these reasons is its ability to transmit disease to humans and livestock with its ability for economical damage to foodstuff and structures being another. Many people find the mere mention of having mice as a sign of being dirty, generally this is not the case as the mouse is only after a food source and it will not differentiate between the two; however, being clean it is a lot easier to spot the signs of an infestation. Just having seen mouse evidence this alone can be a reason for control.

Mice do carry diseases in them that can be harmful to people, with Salmonellosis a major one. Salmonellosis is carried and caught through direct contact with contaminated food or water with mouse droppings or a result of passive transmission by them.

Food loss is another reason for control with severe losses financially being taken every year in the food industry due to mice. In this mice are responsible for the contamination of products that can result in foodstuffs being a total loss and it becoming downgraded for animal purposes. Clearly with this a factor there is a need for control.

Structural damage is widespread due to mice as anything is usually susceptible to gnawing. Electrics are a common target and damage due to rodents does cost industry dear along with the risk to people’s lives.

Information about mice is also available to download for reference.