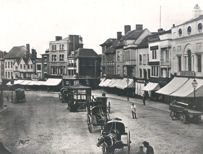 Broadgate has been the heart of Coventry for almost 1,000 years. The name comes from the broad or wide gate of Coventry Castle that would once have been close to where Cathedral Lanes Shopping Centre now stands.

The castle was built around the year 1100 and is thought to have covered a large area stretching from Broadgate down to Bayley Lane where The Herbert now stands.

The castle stood for about 200 years before it eventually became derelict and was demolished. Archaeological digs found huge ditches measuring 9m wide and 6.5m deep, that are thought to be part of the lost castle's defences.

Outside the castle's gate would have been a large and busy market square which extended from Greyfriar's Lane to The Burges. The square gradually became smaller as more shops and buildings were built on and around it, but Broadgate remained a crossroads at the heart of the city and kept much of its medieval character and layout into the 20th century.

Coventry was heavily bombed on the night of 14 November 1940. Broadgate was one of the worst hit areas and almost all of the buildings were destroyed or seriously damaged.

Donald Gibson, the City Architect, designed a new Broadgate which would be a square with a central island with traffic going around it.

Work on the new Broadgate started soon after the war, but progress was slow because of post-war shortages and the lack of building materials. The new Broadgate was the first part of the new city centre to be completed and was officially opened by the then Princess Elizabeth in 1948.

The statue of Lady Godiva was designed and made by the sculptor Sir William Reid Dick and was officially unveiled in October 1949 by Mrs Douglas, the wife of the US Ambassador to Britain.

The statue is made of cast bronze and has a Portland stone plinth.

Broadgate House was the first new building in Broadgate to be completed and was opened in May 1953. It was later followed by the Owen Owen department store (now Primark) and the Hotel Leofric in 1955. The remaining side of the square has 'temporary' pre-fab shops until they were eventually replaced by Cathedral Lanes in 1990.

The clock was installed in 1953. At every hour the clock sets in motion, recalling the legend of Lady Godiva's famous ride naked through Coventry. Peeping Tom, the tailor who disobeyed her command to stay behind closed shutters is seen to look out of an upper window and is stricken with blindness. Further information about the Lady Godiva Clock from the Coventry Society.

Next Memorial to 1939 Broadgate bombing