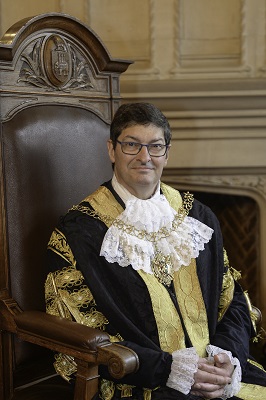 Cllr Maton was first elected to the Council in 1987 and represented Whoberley Ward for 16 years. He has represented the residents of Henley Ward since 2006.

His positions at the Council have included Cabinet Member for Education, Social Services and Economic Development, Jobs and Planning, and Chair of the Planning Committee.

He has been married to Angela, who will be his Lady Mayoress, for 44 years and they have two daughters and four grandchildren.

He said: “I am so proud to be named Lord Mayor of my home city.

“It is 35 years now since I first became a councillor, and I have been honoured to represent the people of Coventry, and to serve alongside councillors past and present.

“The last 12 months have been a great time for Coventry, with our role as UK City of Culture and the first green shoots of recovery from the COVID pandemic. I have been delighted to be a part of a year that challenged and changed our city.

“Now though, we have a different challenge as we start to build a legacy from those days and I look forward to supporting that work in my year as Lord Mayor.”

Cllr Maton has named his chosen charities as CRASAC (the Coventry Rape and Sexual Abuse Centre), the Coventry Refugee and Migrant Centre, and the Alzheimer’s Society.