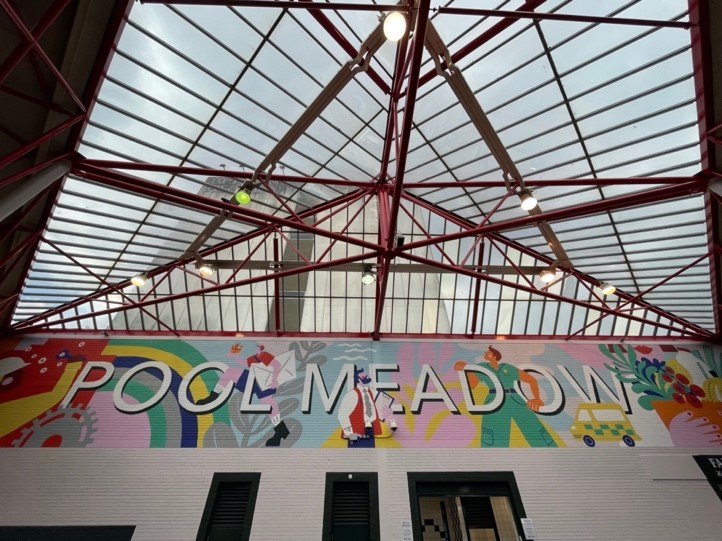 Coventry’s pedestrianised shopping precinct was the first pedestrianised shopping centre in Europe when it was created in the 1950s by the then Chief Architect for Coventry City Council, Sir Donald Gibson CBE. It was heralded for its pioneering design, featured in architectural journals, and attracted architectural students from around the world.
Subsequent developments in the 1980s-1990s departed from Gibson’s original vision; and the UK City of Culture in 2021 presented Coventry with an opportunity for the city to restore the city centre to its design goals and transforming the shopping and visitor experience for the city.
As part of a wider £44m city centre programme, the Council secured an additional £11m of funding this year for investment in the City Centre and public realm. This has led to improvements including:
•    Upper Precinct public realm transformation;
•    Market Way public realm improvements;
•    city centre public arts programme including Hertford Street, Pepper Lane, Pool Meadow;
•    Bull Yard fountains and picnic benches; and
•    lighting of Coventry’s three spires. 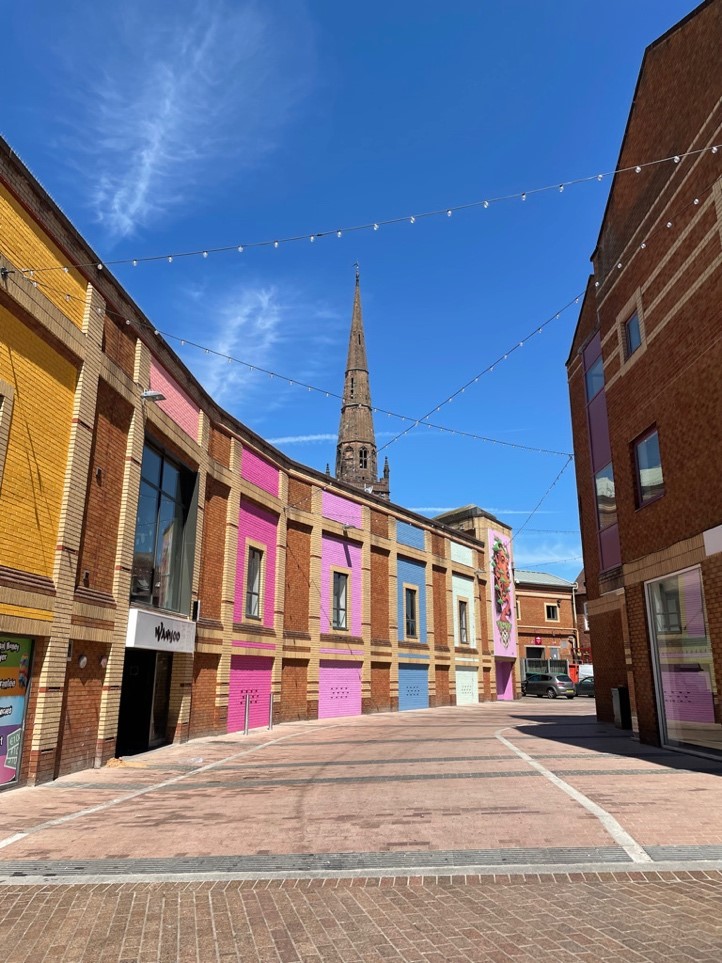 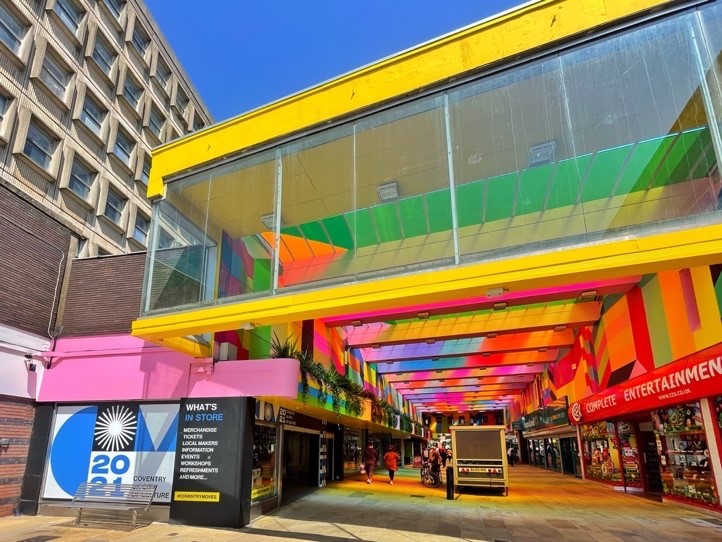 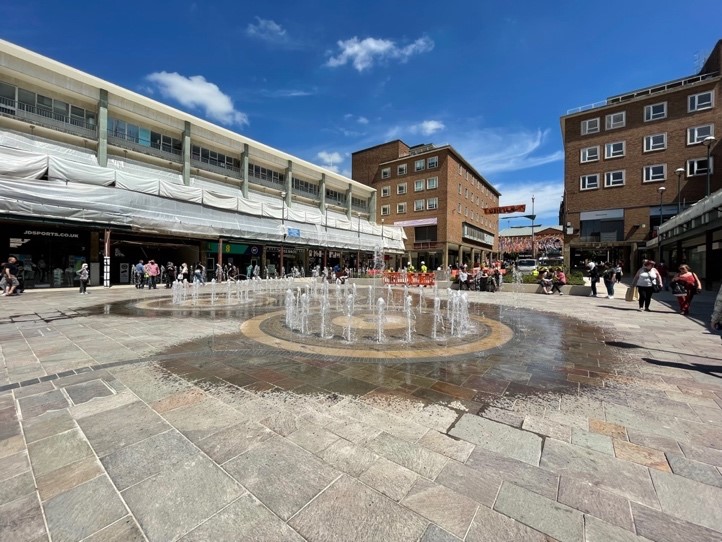 The Getting Building Fund (GBF) is a programme to support the recovery of UK regions after COVID-19. Coventry and Warwickshire have received a GBF allocation of £19.825m across 11 projects. At the end of March 2021 all 11 projects had signed Grant Aid Agreements and final funding contracts. Most of the projects have begun construction work and have begun spending the GBF grant allocation. They include a major refurbishment of the Ricoh Arena in preparation for hosting the Commonwealth Games in 2022, advancement of the Very Light Rail R&D stage, capital works at host venues for UK City of Culture 2021, and the Catalyst project at the former Art Deco building on Abbey Street in Nuneaton to support the creation of flexible office and workshop space for new creative SMEs.

A new boutique hotel on the Friargate Boulevard

One of the Council’s key corporate priorities is the realisation of high-quality new hotels within the city to support its economic development, inward investment, and visitor economy ambitions. In Autumn 2020, an Agreement for Lease was signed between Castlebridge and the Council that will result in a 100 bed Hotel Indigo being delivered in the Friargate business district. As well as being a fantastic new hotel in its own right (alongside a high-quality restaurant and bar open to the general public), the hotel will play a key role in enhancing the city’s reputation, be a catalyst for the wider Friargate scheme and provide approximately 40 permanent jobs.

In order to take forward the construction of the hotel, Castlebridge need to secure the necessary development financing and their ability to do so has, unsurprisingly, been affected by the COVID-19 crisis over the past 12+ months which has had a significant impact on the leisure and hospitality sector as well as all other sectors of the economy. In March 2021, Council approved the principle of a repayable loan agreement with Castlebridge to provide gap funding for part of the cost of developing the hotel.

The Council is working with the Friargate Joint Venture to realise the delivery of the next commercial office building within the Friargate business district, Two Friargate. Two Friargate will provide 134,000 square feet of high-quality commercial office space which will be on a par with the best the region has to offer and will play an important part in the Council delivering its economic development and inward investment objectives for the city.
In September 2020, Coventry City Council approved funding worth £17m to support the development of Two Friargate (this funding is in addition to the £51.2m grant that the Council received from the West Midlands Combined Authority in 2018 to support the delivery of the first phase of Friargate).
Two Friargate started on site in November 2020 and will be complete during the Autumn of 2022. A second office building at Friargate is part of the wider plans to expand the Friargate development and to make it and the city an even more attractive place for businesses to invest in. 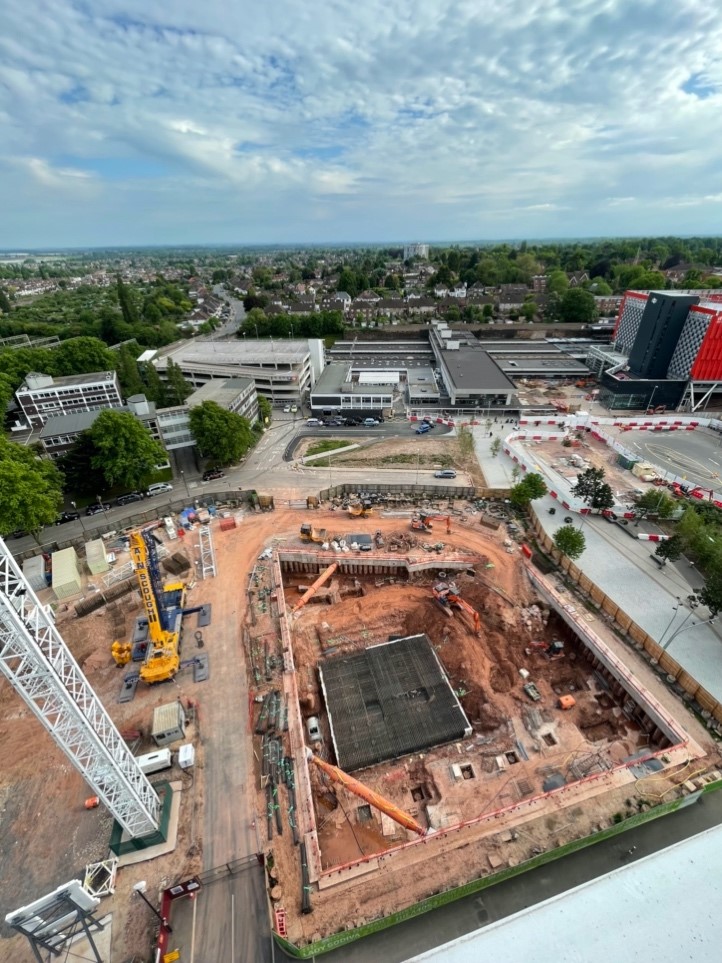 Above: site preparation for Two Friargate

It is estimated that the scheme will create 700 jobs during the construction phase of the scheme, with many more jobs created when the building is operational.

City centre south is the Council’s key regeneration priority for the city centre and will transform seven hectares of the city through a new, mixed use development scheme that will provide hundreds of new homes, a high-quality public realm environment and modern, forward looking commercial, leisure and retail spaces. The Council has been working with its development partner, Shearer Property Group, to prepare a planning application for the scheme and, following public consultation, this was submitted to the Council in November 2020 with a Resolution to Grant Planning Consent achieved in April 2021. One of the key enabling projects for City Centre South, the demolition of Coventry Point, was completed in Autumn 2020.

Visits to the city centre

Footfall in the retail area of Coventry city centre, the volumes of people walking around pedestrianised parts, were at unprecedented low levels. This is unsurprising given the various states of lockdown local residents were in during this time due to the pandemic and that retail and hospitality were forced to be closed for long periods during 2020/21. Overall, the volume of footfall in 2020/21 (April 2020 to March 2021) was 60.7% lower than it was previous year 2019/20. The data that gives indications of the picture across the country overall shows the Coventry drop in footfall to be in line with the average in other places.
Footfall was down significantly and to a similar extent across all locations in the prime retail areas of the city centre. Footfall was down by most in April to June; 84% lower compared to April to June 2019. Footfall across the period July to September 2020 was down by 38% compared to the same period in 2019, it was year-on-year down 49% in October to December 2020, and in January to March 2021 footfall was down 78% compared to 2020. So, footfall changed as restrictions on movement, government advice and restrictions on retail, leisure and hospitality changed throughout the year. The advice to work from home will also have had a significantly negative impact on footfall. It was at record low levels throughout the whole year, for no single week in the preceding 10 years over which footfall has been measured in this way was footfall anywhere close to such low levels nor have the year on year % change for any single week been anywhere near the % reduction for any of the whole quarters of 2020/21.
Footfall hit its lowest level during April 2020, 90% lower than normal levels at the same time in 2019. It grew gradually and very slowly up until June when it was about 80% down, and when retail reopened during June footfall jumped, almost doubling in a week but still at levels more than 50% lower than in the year before. Footfall gradually increased, reaching levels about 30% lower than in the year before by the end of October; the November lockdown then meant levels were low again. When restrictions were relaxed in December footfall recovered but remained 30% to 40% lower than during the same Christmas period in 2019. The January 2021 lockdown brought footfall levels down to extremely low levels again, about 80% lower than normal and they increased gradually and slowly up to the end of March 2021.
Coventry footfall had been falling a little last year, 6.5% down from the previous year (part of this fall was due to the significant drop in the last weeks of March 2020) but the fall this year was unprecedented and on a totally different way and scale than in any time previously measured. It is difficult to use this year's data, or trends from previous years, to predict what footfall will be like in the coming year; particularly because predicting the path of recovery is almost impossible given there is no president but also combining this with the fact that we are entering Coventry's year as the UK City of Culture and the attractions and events that will take place in the city centre during the year. Also, the remodelling of the public realm that has taken and is taking place will change the way people experience the city centre and how they walk around it.
Note that city centre demolition works have resulted in some technical difficulties in the collection of footfall data – for instance, demolition of Coventry Point has meant that there is no data available for Market Way; while the opening up of the vista between Upper Precinct and Broadgate Square means that the Upper Precinct footfall counters is unable to count all pedestrians passing through.

Above: Centre for Cities overall recovery and spend index
The Centre for Cities and presented in their high streets recovery tracker allows us to track the ups and downs of footfall in Coventry's ‘high street’ area to how other cities have fared. By the end of February 2021, Coventry has an index of 24, meaning footfall was 76% lower than normal at this point; in this measure we rank relatively poorly compared to other cities; amongst the lowest quarter of all English cities in terms of how much city centre footfall has recovered.
They estimate the ‘spend index’ for Coventry ‘high street’ at 79 between February and April 2021, implying spending levels in retail in the area were 21% lower than normal levels; this ranks Coventry amongst the bottom half of city centres in this respect. Recovery in footfall has been relatively better at the weekend with an index of 24, compared to a lower recovery at the night-time, with an index of 15 and the level of footfall amongst people who usually work in the city centre, which was still incredibly low by the end of February with an index of 6.

Google mobility data gives us a picture of people's movements more generally across a wider area of the city. It shows that movement of Coventry residents in workplace areas, retail, and recreation areas and around transit stations had remained at significantly lower levels than before the pandemic throughout 2020/21 (against a baseline period of January to February 2020). Movement levels around these three types of location were gradually recovering during the first few months of 2021 after lows in early January 2021; lows at levels similar to those in late March 2020 during the first lockdown. However, by the end of March 2021 movement levels remained significantly lower than normal; 35%, 43%, and 52% lower than in January to February 2020, respectively. On the other hand, perhaps due to people doing their daily exercise and people being less likely to travel distances by car, movement levels in Coventry residential areas were consistently higher than normal throughout the year and in Coventry parks they spiked at levels much higher than normal in spring and summer 2020 and spring 2021; but came down to lower levels than normal during the colder months in the autumn and winter of 2020.
Below: Google mobility data – percentage change in movement compared to the baseline (seven day moving average). 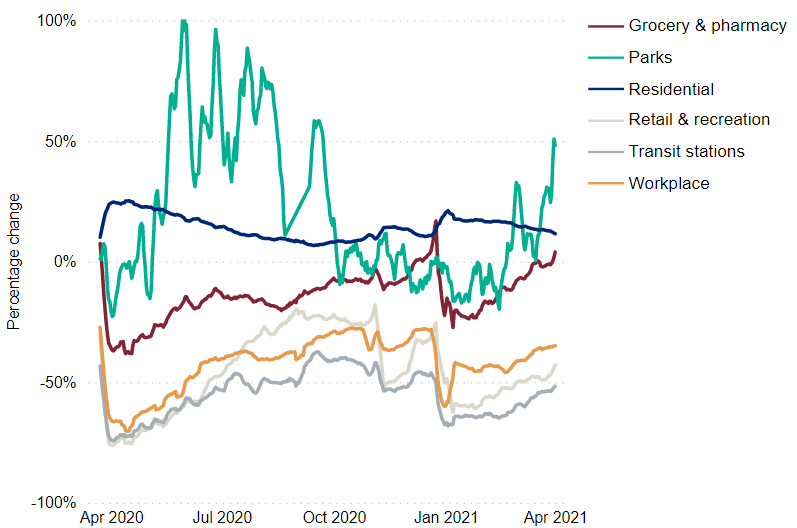 Perceptions of the city centre

Provisional results from our biennial household survey, conducted in February 2021, suggest nearly three in ten residents did not visit the city centre in the past year; with just over half of residents giving the city centre a negative rating. This is, however, to be expected and in this particular case, should not be a cause for concern at this stage, given the waves of pandemic-related lockdowns resulting in closure of much of the leisure and retail offer, as well as office-based workers working from home; and significant disruption to the city centre offer during this period as a result of the infrastructure and public realm works across much of the city centre.