Cleaner air for Coventry - the next stage

Air pollution is having a harmful impact on the health of people living, working and studying within Coventry. Like many towns and cities throughout the UK, roadside pollution levels, especially those resulting from Nitrogen Dioxide (NO2) emissions from traffic, are a concern.

In Coventry we have analysed the scale of the problem by air quality monitoring and traffic modelling undertaken by the Council.

The health impacts of air pollution include increased risk of asthma, heart disease, strokes, lung disease and dementia. So, improvements need to be made to air quality in the city.

Since 2017 the Council has been working closely with the Government’s Joint Air Quality Unit [JAQU] to develop an Action Plan to reduce NO2 levels below the legal limit of 40ug/m3 in the shortest possible time.

In February, following submission of the Outline Business Case and modelling, the Government confirmed that Coventry does not need to introduce a charging Clean Air Zone (CAZ D), which would have seen older and more polluting vehicles charged for entering a large area of the city.

Instead, the Government has agreed that the package of measures put forward by the Council would be effective in reducing NO2 levels without the wider social and economic disbenefits that the CAZ D would have created.

The resulting Local Air Quality Action Plan (LAQAP) has been based on air quality and traffic monitoring data and modelling, and the package of measures focusses on improving NO2 levels at those locations where particular problems have been identified, which are Holyhead Road and Foleshill Road. The map below illustrates the locations where we need to reduce congestion and improve capacity. 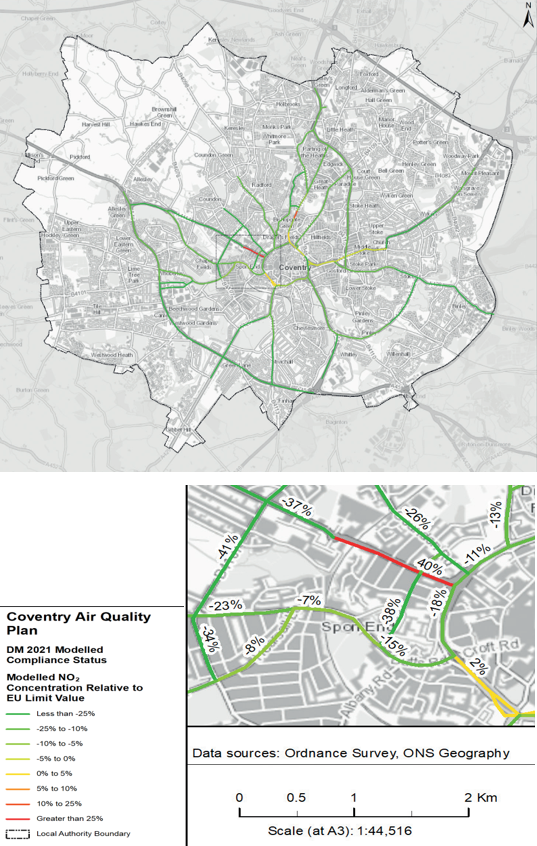 The LAQAP package focuses upon encouraging local trips to be made by walking and cycling rather than the car, with significant investment in a new high-quality cycle route between Coundon and the city centre, and on an engagement programme with schools, businesses and local communities building on the successful work already done in the Walsgrave corridor.  The Council is also working with Transport for West Midlands on the Mobility Credits pilot programme which will give Coventry residents with an older, polluting car the chance to exchange their vehicle for mobility credits. The credits could be spent on bus and rail travel, as well as new transport modes such as car clubs or bikeshare schemes.

The package also focuses upon the greening of the fleet, with existing programmes to upgrade the bus, taxi and commercial fleets operating within the city, including the Electric Fleet First project that gives businesses the opportunity to try out electric vans, pool cars and taxis with the aim of encouraging them to switch to zero emission vehicles.

The third element of the package includes targeted junction and road layout changes on Holyhead Road and parallel routes to allow freer-flowing traffic, reduce congestion and to provide better walking and cycling routes from both Spon End and Coundon into the city. These measures will allow the traffic flows on Holyhead Road to be reduced through restrictions if necessary to allow NO2 levels to be brought below legal limits on this route.

On Foleshill Road, traffic management measures will be introduced to remove through traffic, which will be encouraged to use the A444 to access the city centre instead.

Government has endorsed this package and has awarded the Council £24.5 million in grant funding to deliver it.

The agreed plan that we are consulting on is the Local Air Quality Action Plan. We consulted with the public and businesses on the Plan in March 2018 and have amended the package to reflect the feedback received. Your feedback on the latest consultation will help further inform what will be included in the final LAQAP which will be submitted to Government in June.

The Council is keen to improve air quality across the city, however the current Government Direction instructs us to tackle and reduce NO2 levels specifically, and the Local Air Quality Action Plan will be judged solely, by Government, on its impact on NO2.  Through these measures, though, we aim to have a beneficial impact on air quality generally, including particulates.

For more information on the detailed proposals contained in the plan, please take the time to read the background information .

This consultation ended on 31 May 2020, this page will remain for two weeks for information only.

For any queries please contact us by e-mailing [email protected].